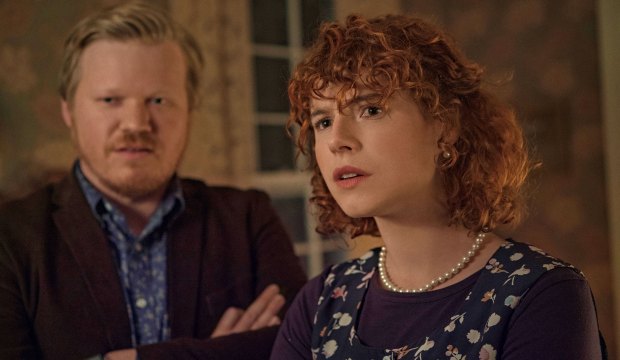 Oscar winner Charlie Kaufman‘s unsettling new film “I’m Thinking of Ending Things” debuted on Netflix on September 4. Despite his Oscars pedigree, Kaufman’s new film is an unconventional awards contender. But I think it is the most eerily perfect movie to exemplify the cinematic and societal year 2020.

Kaufman wrote “Being John Malkovich” (1999) and “Adaptation” (2002) and won an Oscar for co-writing “Eternal Sunshine of the Spotless Mind” (2004). From those films and his subsequent directorial efforts “Synecdoche, New York” (2008) and “Anomalisa” (2015), you could probably guess that there’s more to this story than meets the eye.

Jessie Buckley stars as a young woman who, as the title indicates, is thinking of ending things. That sounds suicidal at first, until she further explains that she’s considering breaking it off with her new boyfriend (Jesse Plemons). Honestly, though, this is a Charlie Kaufman movie, so she could mean it both ways. She’s second-guessing her decision to visit his parents (Toni Collette and David Thewlis) at a farmhouse during a snowstorm, but it’s too late to turn back now.

SEEOscars are one of Emmys biggest winners

Buckley questions her relationship and herself as she’s trapped in a house where the very passage of time seems to be broken. Beyond that, the film is about coming to terms with loneliness and life’s missed opportunities and trying to fill those voids with art, media and learning. This is not a movie about COVID-19, but its striking how many of those themes resonate in a year of missed opportunities as the days, weeks, and months all blend together.

Or maybe it’s me. This often dreamlike film is nothing if not open to interpretation, but as an expression of a state of mind, it feels kind of like an expression of what it feels like to live through 2020. But will Oscar voters be able to relate to it? It’s got an awards-friendly cast, standout editing and makeup design, strong reviews, and of course Kaufman has a pretty strong track record thus far.

That said, a film as dark and abstract as “I’m Thinking of Ending Things” might be a tough sell, as were other acclaimed but disturbing films in recent years that missed the cut in most or all categories like “We Need to Talk About Kevin” (2011), “Hereditary” (2018) and “The Lighthouse” (2019). But the Oscars have also gone for reality-bending head-trips like “Black Swan” (2010), “Birdman” (2014) and “Get Out” (2016). So I hope voters think about “Ending Things” this awards season. It’s a most unusual film for what will be a most unusual Oscars.