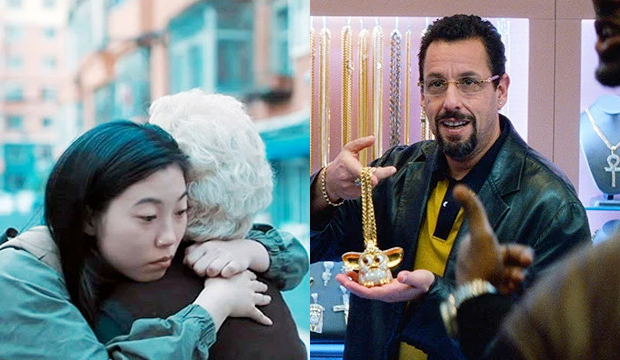 The 35th Film Independent Spirit Awards aired live coast-to-coast Saturday, February 8 on IFC, aka the day before the Oscars. If you missed the ceremony on TV, worry not — Gold Derby has you covered with our informative play-by-play. Below, follow along with our updating live blog as we reveal all of the 2020 Spirit Awards winners as they happen. Funny lady Aubrey Plaza returned as host for the second consecutive year.

SEEThis is how he wins: Adam Sandler will shine at Spirit Awards with a victory for ‘Uncut Gems’

SEERenee Zellweger (‘Judy’) is the only actor nominated at Independent Spirit Awards AND Oscars, so she’ll need 2 speeches

Now keep refreshing/reloading our updating live blog with all of the minute-by-minute action as it happens in Santa Monica.

1:59 p.m. — Grab the popcorn and top off your wine glass, because the show is about to begin! The red carpet is officially wrapped and all of the A-listers have made their way into the enormous tent on the hot sand.

2:00 p.m. — In a pre-taped video, Plaza is having an old-school Hollywood freak out as she realizes that “film is f***ing dead.” She then has a vision of Judy Garland (also Plaza) who tries to console her by telling her she needs to “learn how to handle your medicine” because she’s “50 years old.” The clip ends with Plaza and Garland making out (yep) and Jon Hamm telling her “good luck” before the show. It’s all so very IFC.

2:04 p.m. — Plaza comes out on stage singing “Come on Get Happy,” which she calls her “comfort zone.” She jokes Shia LaBeouf has been here all week and that they just built the tent around him. Willem Dafoe doesn’t seem to love the joke about looking like a lighthouse keeper. Jennifer Lopez gets a big round of applause for her Super Bowl halftime show, but — big laugh alert — hey Mary Kay Place, what did you do last weekend? The host also pokes fun at Ted Sarandos, Idina Menzel, Nicholas Cage and the absent Adam Driver.

2:11 p.m. — Best Supporting Male is up first, presented by “Marriage Story” buddies Laura Dern and Scarlett Johansson. And the winner is … Willem Dafoe (“The Lighthouse”)! He “breaks the rules” by reading his speech, thanking director Robert Eggers as well as the “beautiful script.” Dafoe jokes, “The weather sucked but it was fun.” Finally, he thanks his lead actor Robert Pattinson (who’s not here this evening) because “it takes two to tango.”

2:20 p.m. — Plaza brings out one of J.Lo’s co-stars from “Hustlers” as this year’s ambassador — you know, her “a**hole” boss who was eating a sandwich. I’m sure this was a funny comedy bit, I just didn’t get it.

2:27 p.m. — “Better Call Saul” co-stars Bob Odenkirk and Giancarlo Esposito step out on stage to present Best Documentary. And the Spirit Award goes to … “American Factory”! Contrary to popular belief, Barack Obama and Michelle Obama are not actually winners of this award as it’s simply from their production company. Director Julia Reichert speaks about income inequality and the power that comes from a united citizenry. She and co-director Steven Bognar go on so long they have to be played off by music.

2:37 p.m. — Here comes America Ferrera to discuss the importance of women directors. We have “a lot of work to do,” she informs the room. Kelly Reichardt is the recipient of the Bonnie Award, which honors female independent directors. Clips of her prior speech are shown to the audience.

2:40 p.m. — To present the award for Best Cinematography, here comes Annie Clark and Carrie Brownstein. Congrats to Jarin Blaschke (“The Lighthouse”) for the big win! He’s also nominated at Sunday’s Oscars and recently prevailed at the ASC guild awards. “The [weather] conditions were quite hard,” he notes at the podium, “but it was much more comfortable than this.”

2:48 p.m. — Margaret Qualley and Joey King are the presenters of the special John Cassavetes Award, which honors films made for under $5,000. And the trophy goes to “Give Me Liberty”! No big surprise considering it has a whopping four bids tonight. “This is an incredible honor,” writer/producer Alice Austen proudly states during her speech. Writer/director Kirill Mikhanovsky gets emotional as he mentions the importance of John Cassavetes.

2:58 p.m. — First-time Spirit nominees Taylor Russell and Noah Jupe walk out to present the award for Best First Screenplay. Fredrica Bailey and Stefon Bristol win for “See You Yesterday!” Bristol praises God … and his mentor Spike Lee. Bailey is “so shocked” to have prevailed and also thanks God, Netflix and Lee, in that order.

3:02 p.m. — Presenting Best First Feature are Elisabeth Moss and Jim Gaffigan, who joke about their own first film roles. (Apparently Moss starred alongside Hulk Hogan in an alien family comedy?) Congrats to the big winner, “Booksmart”! This is Wilde’s directorial debut for a film that many believe should have received some Oscar love. She mentions her “incredible, inspiring, formidable” co-nominees and then thanks her cast and crew for respecting her “crazy” idea.

3:10 p.m. — Plaza and Michael Shannon star in a “Lighthouse” spoof where she wants to know what he thought of her hosting abilities so far. It’s full of mustaches, farting, and over-the-top accents.

3:14 p.m. — Zazie Beetz and Jon M. Chu walk out to present the “Parasite” award, aka Best International Film. This is Bong Joon Ho‘s first Spirit win, though he was previously nominated for “Mother” (2010). He calls the trophy a “huge honor” and introduces his translator, who we’ve seen everywhere from the Golden Globes to Critics’ Choice and BAFTAs. Bong tells a funny story about seeing a rat running around after the first screening of “Parasite” in New York. “At the time I thought maybe it’s a symbol of luck,” he recalls.

3:25 p.m. — To honor LGBTQ efforts in film, Plaza shows a highlight reel of “shine a spotlight on some of the gayest moments in other films that you may not have realized were gay.” The Gay Men’s Chorus of Los Angeles mentions everyone from Idina Menzel in “Uncut Gems” to J.Lo pole-dancing to Fiona Apple in “Hustlers” to the title of the film “Diane” to “all of Laura Dern.”

3:31 p.m. — Presenting the Best Screenplay trophy are Mindy Kaling and Nick Kroll, who call writing scripts “terrible.” And Noah Baumbach wins his first Spirit Award for writing “Marriage Story”! He has a chance of winning at the Oscars on Sunday night, too. Even though writing gives him a “great privilege to do something that you love,” he admits that he kind of “hates” writing because it’s “hard” and it’s “agony.” Baumbach then gives this funny shout-out to his girlfriend Greta Gerwig: “Even though she made a movie too expensive for the Spirit Awards, she is no less independent than anyone here.”

3:38 p.m. — Idina Menzel and Alfre Woodard are all smiles as they walk out to present Best Supporting Female. “For the first time at the Spirit Awards, all five nominees in an acting category are women of color,” they note to wild applause. And the winner is … Zhao Shuzhen (“The Farewell”)! She’s in China right now because of the coronavirus, but her director Lulu Wang accepts on her behalf.

3:47 p.m. — Nicholas Cage receives big applause when he comes out to honor “Marriage Story” with the Robert Altman Award recognizing the film’s director, casting directors and ensemble cast. Baumbach gives the speech on behalf of his large group, noting how he thought about Altman a lot while making “Marriage Story.” He stands up for independent films, saying they are “as major as anything.”

SEENoah Baumbach movies: All 9 films ranked from worst to best

4:00 p.m. — Don Cheadle gets to present this year’s Best Director prize. And the winner(s) are … Benny Safdie and Josh Safdie (“Uncut Gems”)! The brothers do a hilarious bit at the podium where they both give their own speech at the same time. I’ve never seen anything like it. One of them thanks lead actor Sandler, or maybe both of them do? It’s truly amazing. YouTube this speech right now — you won’t be disappointed.

4:09 p.m. — Rachel Brosnahan and Octavia Spencer are out next to present Best Male Lead. Congrats to Adam Sandler (“Uncut Gems”)! After a decades-long career, Sandler finally wins a major acting award … and the audience is on its feet. He recites his speech in his classic gravelly low sing-song voice. “I’d like to also give a shout-out to my fellow nominees, who will now and forever be known as the guys who lost to f***ing Adam Sandler,” he exclaims. He then jokingly disses the Oscars for snubbing him, saying, “Our independent personalities will shine on forever!” The crowd is eating up every. single. word.

4:18 p.m. — Presenter Naomi Watts congratulations Sandler before moving on to announce the winner of Best Female Lead. Of course, it goes to Oscar front-runner Renee Zellweger (“Judy”)! In fact, she’s the only person nominated this year at both the Oscars and Spirits. “This is a really big deal to me,” she divulges at the podium. She recalls that the last time she was invited to the Spirit Awards, she got a sunburn in the tent.

4:28 p.m. — For the final award of the evening, “The Irishman” himself Robert De Niro (aka Plaza’s “ex”) is on hand to present Best Feature. He gets a standing ovation just for walking out. And the big prize goes to … “The Farewell”! That’s truly a huge shocker, as it was skunked across the board at the Oscars. Director Lulu Wang proclaims, “You guys, oh my God!” She says there’s no need to encourage more women filmmakers because “there are lots of women making films and who want to make films … really what women need are just the job.”

4:36 p.m. — And that’s a wrap! What did you think of this year’s Spirit Awards winners and Plaza as host? Sound off down in the comments section.