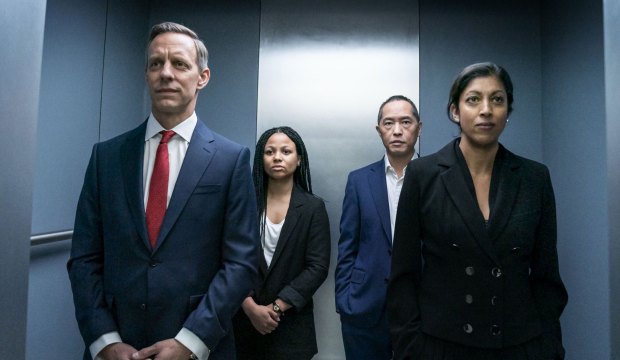 HBO’s “Succession” kicked off its 2020 awards romp with two major wins at the Golden Globes, landing Brian Cox his first Globe for playing billionaire patriarch Logan Roy and claiming the top honor as Best Drama Series. The financial family drama didn’t produce new episodes in time for the upcoming 2021 contest, though, leaving the race wide open for a new drama series to capitalize. With the Hollywood Foreign Press Association (HFPA) demonstrating their love of dramatized high finance and economic intrigue, they may see a worthwhile successor in HBO’s new series “Industry.”

Embedded in the world of UK finance and foreign exchange, “Industry” follows four recent college graduates who land highly coveted, temporary jobs at London’s Pierpoint bank. Competing against one another for permanent spots on the team and navigating the whims of their bosses on the sales desk, this relentlessly ambitious but self-doubting quartet forms alliances, rivalries, and sparks endless permutations of interoffice romance.

Although it trails its competition in our current combined odds, “Industry” could easily appeal to Globes voters. More than any other major awards body, the Globes love to discover and crown a new series early, leading the way for the Screen Actors Guild and the Emmys. It certainly doesn’t hurt that three of last year’s nominees — “Big Little Lies,” “Succession,” and “The Morning Show” — are all out of contention in 2021, leaving plenty of room for an unexpected newcomer. And though HBO has a number of brand-new dramas eligible, including “Lovecraft Country,” “Perry Mason,” “We Are Who We Are,” and “The Outsider,” “Industry” has the benefit of airing right now, so it will be the freshest of the bunch in voters’ minds.

SEE5 top TV showrunners reflect on their early careers in Hollywood: ‘I was absolutely obsessed with TV’ [EXCLUSIVE VIDEO INTERVIEWS]

If the Globes mint “Industry” with its first series bid, look out for a corresponding nomination for its star Myha’la Herrold. She plays Harper, the series’ ambitious, impressive, courageous, and slightly deceptive protagonist who hopes to prove herself in the world of investment banking, which she considers a true meritocracy. Though this is an ensemble show, Harper is arguably the audience’s eyes and ears into the often befuddling culture of international finance, and Herrold is magnetic and unpredictable in the role.

Herrold also sits far outside of a nomination in our current odds, but a surprise bid is not out of the question. Just look back to the first season of “Succession,” when Kieran Culkin was hardly even on the radar in 2019, but still scored his first of two consecutive bids for the show. So there’s a chance this new investment could be a smart bet at the Globes.