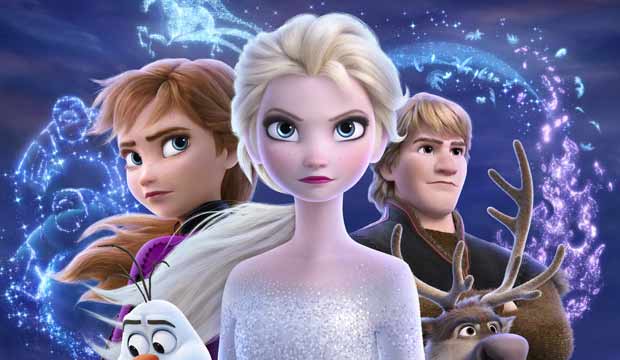 Although Disney’s “Frozen II” was glaringly omitted in Best Animated Feature in the Academy Awards nominations, it was still able to bag a Best Song nom for “Into the Unknown,” which was written by Kristen Anderson-Lopez and Robert Lopez. In our combined Oscar odds it currently sits in third place behind “(I’m Gonna) Love Me Again” (“Rocketman”) and “Stand Up” (“Harriet”), but ahead of “I Can’t Let You Throw Yourself Away” (“Toy Story 4”) and “I’m Standing With You” (“Breakthrough”). Here, however, are four reasons why I think it can still prevail and the animated feature snub might not bother its chances anyway.

1. Anderson-Lopez and Lopez are beloved.
First off, Anderson-Lopez and Lopez have a pitch-perfect two-for-two track record at the Oscars, where they nabbed Best Song prizes for “Frozen’s” “Let It Go” (2013) and “Coco’s” “Remember Me” (2017). While they don’t have the additional boost they had on their last go-arounds thanks to both “Frozen” and “Coco” also winning Best Animated Feature, they might be name-checked into another win based on collective goodwill alone. After all, between the two, they also have two Annie, three Critics’ Choice, Grammy and Tony Awards wins (all thee Tonys belong to Lopez himself), as well as three Golden Globe and Primetime Emmy Awards noms. (Lopez is even an EGOT recipient.) With that said, it’s not like “Into the Unknown” hasn’t already amassed a significant amount of support en route to the Oscars: Although it hasn’t won any big prizes yet, it did land Best Song bids at both Critics’ Choice and the Globes. Plus, Anderson-Lopez and Lopez reaped an Annie nom for Best Achievement for Music in an Animated Feature Production alongside the movie’s composer Christophe Beck.

2. “Frozen II” is a box office hit.
With a worldwide gross of approximately $1.4 billion so far, “Frozen II” is not only a box office hit but has become the highest-grossing animated feature of all time, edging out its predecessor which took in around $1.28 billion. Although box office success doesn’t always effectuate a successful showing on Oscar night, it’s at least an indication that the movie’s been widely seen. This is especially important as the entire academy is allowed to vote for the winners across all categories, which is also why we often see many below-the-line prizes go to Best Animated Feature or Picture nominees.

3. Best Original Song is the only place to reward the film.
Okay, so since “Frozen II” was snubbed in Best Animated Feature, “Into the Unknown” can’t prevail? Not so fast! Best Original Song is now the only place to reward the movie, which means that all its support can accumulate there. And going by the fact that the movie still snuck into the animated feature races at Critics’ Choice, Annies, BAFTA Awards and Globes, it’s safe to assume that it still has enough passion to pull off an original song win. Besides, “(I’m Gonna) Love Me Again” and “I’m Standing With You” are also the only nominations for “Rocketman” and “Breakthrough,” respectively, while “Stand Up” is one of just two noms for “Harriet,” with the other being in Best Actress for Cynthia Erivo (who also co-wrote “Stand Up”). Yes, “I Can’t Let You Throw Yourself Away” could capitalize on “Toy Story 4’s” animated feature nom, but writer Randy Newman may split the vote with himself across categories as he’s also nominated for scoring Noah Baumbach’s “Marriage Story.”

4. Into the Unknown” is academy fare.
Academy voters tend to gravitate toward songs that further a movie’s narrative rather than, for instance, play over its end credits. Like “Let It Go” in “Frozen,” “Into the Unknown,” which is performed by Idina Menzel as Elsa and features Aurora, appears early on in “Frozen II” and helps set up the storyline. It underscores Elsa’s uncertainty about whether to leave Arendelle to find the source of a mysterious voice she’s been hearing. It’s a piece that’s filled with so much energy that makes you want to sing along and, yes, follow Elsa into the unknown. At the same time, however, it tackles the universal struggle of deciding whether to face your fears, which could strike a chord with voters who haven’t necessarily seen the movie yet but have stumbled upon this song. What voters like even more is when a song appears multiple times throughout a movie. While this isn’t the case with “Into the Unknown” per se, the siren call that is woven into the song can is heard several times throughout the movie in Beck’s musical score. Plus, just how Demi Lovato’s version of “Let It Go” played over “Frozen’s” end credits, Panic! At the Disco’s version of “Into the Unknown” plays over “Frozen II’s,” making it clear that it’s indeed the movie’s flagship song.