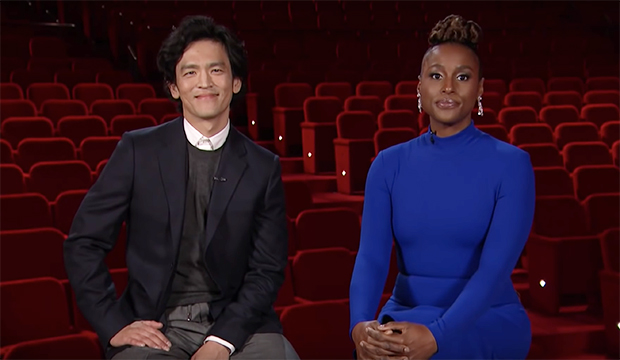 One of the most memorable moments of Monday’s Oscar nominations was when co-announcer Issa Rae subtly, spectacularly dragged the academy for yet another slate of all-male directing nominees, quipping, “Congratulations to those men.”

During a panel for her HBO series “Insecure” at Wednesday’s Television Critics Association winter press tour, Rae explained how she decided to drop that on-point shade, which was not unlike Natalie Portman’s damning “And here are the all-male nominees” at the Golden Globes two years ago.

“John Cho and I were told to just banter for five seconds as the teleprompter loaded, so that was my banter. I didn’t lie,” Rae deadpanned. “I said congratulations, and there were men there.”

The final five were Bong Joon Ho (“Parasite”), Sam Mendes (“1917), Todd Phillips (“Joker”), Martin Scorsese (“The Irishman”) and Quentin Tarantino (“Once Upon a Time in Hollywood”). As everyone knows, only five women have been nominated for Best Director and only one, Kathryn Bigelow (2009’s “The Hurt Locker”), has won. This year, Greta Gerwig (“Little Women”) was trying to become the first woman to receive more than one directing bid. “Little Women” is the only Best Picture nominee directed by a woman and the only one with a sole female lead.

Other female helmers who were MIA from the lineup and who did not get major awards traction for their directing efforts all season were Marielle Heller (“A Beautiful Day in the Neighborhood”), Lulu Wang (“The Farewell”), Kasi Lemmons (“Harriet”), Celine Sciamma (“Portrait of a Lady on Fire”), Lorene Scafaria (“Hustlers”), Olivia Wilde (“Booksmart”) and Alma Har’el (“Honey Boy”). “Beautiful Day” and “Harriet” received acting bids for Tom Hanks and Cynthia Erivo, respectively, with the latter being the only POC acting nominee.

Rae added that she’s “tired of having the same conversation” about representation and diversity. At this point, she’s more curious about the conversations that people in power and decision-makers are having.

“I just think it’s unfortunate. The academy needs to be better,” she declared. “I think every year it’s something. For me, it’s just pointing it out when I see it, but I just don’t want to get too worked up about it. It is what it is at this point. It’s just the conversations happening behind the scenes that I’m most interested in. I don’t want to say too much more about it. It’s annoying.”