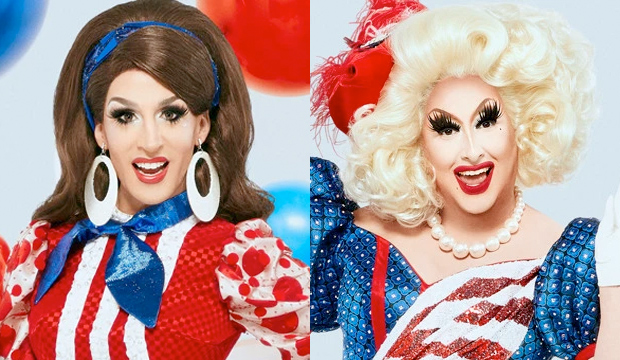 Another grand finale of “RuPaul’s Drag Race” is upon us, where the last four queens battle it out for a spot in the coveted Hall of Fame. This year’s quartet of finalists are Gigi Goode, Jaida Essence Hall, Crystal Methyd and … no one. That’s right, there are only three queens remaining in the competition for Season 12 thanks to Sherry Pie being disqualified after admitting to catfishing and sexual misconduct. Since the finale is typically designed for four contestants — they lip sync against each other in pairs — should host RuPaul Charles invite back the fifth place contender, Jackie Cox, as you-know-who’s replacement? Vote in our poll below.

Jackie Cox’s journey on VH1’s reality TV show was full of highs and lows. She wore her heart on her caftan as she represented her Persian upbringing with class and sophistication (and a little humor), including most notably when she made a red-and-white runway outfit inspired by a traditional hijab. That look even made guest judge Jeff Goldblum tear up. “You can be LGBT and from the Middle East, and there’s gonna be complicated sh*t around that, and that’s okay,” Jackie said in response to Goldblum’s questions about her culture.

Throughout her time on “Drag Race,” this 34-year-old New York City queen won two consecutive mini challenges in Episode 8 and Episode 9, proving she was a force to be reckoned with. However, those victories never translated to the all-important main challenges, where Jackie was the only queen in the Final 7 to never prevail. Instead, the main challenges were dominated by Gigi Goode (four wins), Jaida Essence Hall (three wins) and, yes, Sherry Pie (two wins).

Jackie found herself in the bottom a total of three times, where she had to lip sync for her life to stay in the competition. She took out Widow Von’Du the first time she was up for elimination. The second time, both she and Heidi N Closet were deemed safe by Ru. The third time, she failed to survive when pitted against Crystal Methyd. See the complete bootlist for “RuPaul’s Drag Race” Season 12.

By sending home Jackie, RuPaul simultaneously announced that Crystal would be the third queen in the grand finale, joining Gigi and Jaida. Due to the coronavirus pandemic, this season’s final episode on Friday, May 29 won’t be filmed on the big stage in front of hundreds of passionate fans. Instead, it will be recorded remotely from the players’ homes around the country. The remote reunion special will air one week earlier on Friday, May 22.