Going into Tuesday night’s “Semi-Finals 2” on “World of Dance,” the bar was set extremely high, but Jake and Chau cleared it and then some. So it was a bit of a surprise at the end of the night when the contemporary duo didn’t qualify for the World Final. They were outscored by MDC 3 and Oxygen, so they were eliminated from the competition. But they had higher scores than the two teams that advanced to the final round last week, Jefferson y Adrianita and Geometrie Variable. Were Jake and Chau robbed of a spot? Many of our readers thought so.

We polled “World of Dance” fans to ask who they thought gave the best performances of the night. MDC 3 got the highest score from the judges, and they got the highest marks from our readers too with more than one-third of the vote (35%). But Jake and Chau were second in our poll with 23%, over Oxygen with 18%. So if fans had a say, Jake and Chau would have gotten that second spot in the World Final, not Oxygen. (Disagree? You can keep voting in the poll here.)

The rest of our poll results were in line with how the judges’ scored the acts. Bailey and Kida were fourth with the judges and fourth with us at 13% of the vote, followed by Keagan Capps (7%) and UPeepz (4%). So our readers thought the judges’ rankings were mostly on point. But given all those sky-high scores during “Semi-Finals 2,” shouldn’t all three of those top teams have advanced to the World Final?

The way the Semi-Finals were structured, Jefferson y Adrianita and Geometrie Variable qualified for the World Final with respective scores of 94.3 and 94.0, while Jake and Chau were eliminated with 95.3. Last year’s finale had a wild card spot that went to Unity LA because they had a stellar performance that narrowly lost their division, but would’ve won had they been in any other division. There was no indication that there would be a wild card spot in this year’s finale, but perhaps there should be. 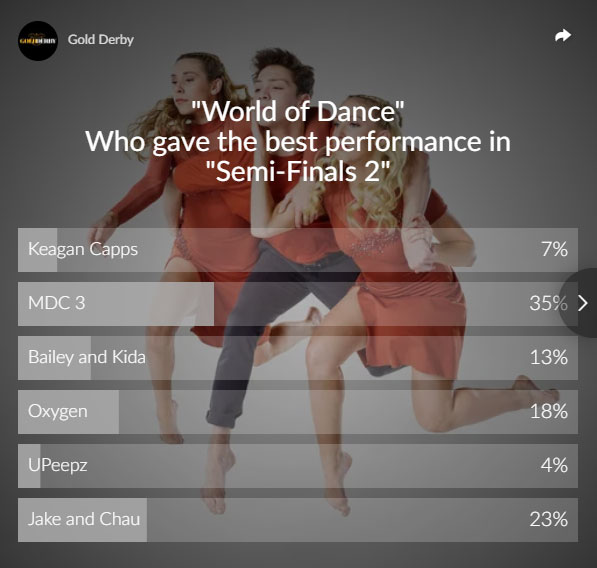