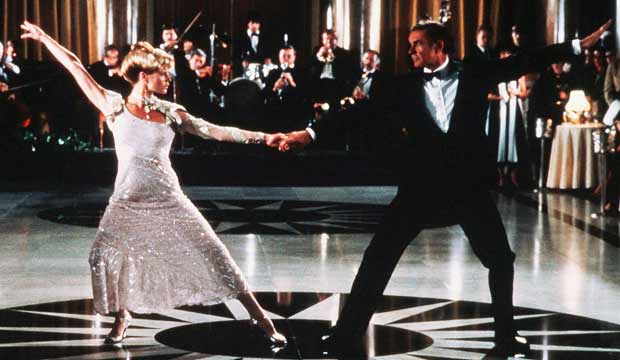 The latest James Bond blockbuster, “No Time To Die,” was originally set to premiere this month, but due to the ongoing pandemic it was pushed back to November 25. Luckily, most of the old Bond films are currently streaming on Amazon Prime, so you can still get your 007 fix while you tough it out inside. Don’t know where to start? Check out our gallery above where we’ve ranked every one of the British spy’s daring adventures, from the most thrilling to the most ridiculous.

James Bond began his career as the hero of a series of spy novels written by former naval intelligence officer Ian Fleming. Since the first film was released in 1962, the series has gone on to become one of the longest-running and most successful series of all time, grossing over $7 billion. The films have been nominated for 14 Oscars and won five, including two for song (“Skyfall and Spectre”), two for sound (“Skyfall” and “Goldfinger”) and one for visual effects (“Thunderball”).

Scottish actor Sean Connery originated the role, and he defined the character’s combination of suave wit, dangerous edge and secret selflessness. He was briefly replaced by male model George Lazenby, who only appeared in one film. After another turn by Connery, “The Saint” star Roger Moore took over the role, and he embraced the series’ playful side. Timothy Dalton had a brief and under-appreciated stint after Moore, but his run was truncated when MGM went through financial troubles. Pierce Brosnan had a well-regarded stretch through the 1990s, and Daniel Craig currently plays the role, though it is rumored that his upcoming film will be his last.

The Bond series varies wildly in quality, but even the worst entries have something going for them, usually an amazing stunt or a memorable villain. The films are also usually well-shot, with gorgeous on-location cinematography and imaginative production design. Everyone has a favorite, usually whichever was the first one they saw in a theater as a kid, but sometimes it was an older entry they discovered later that had unappreciated charms. Shake up a dry martini as you scroll through our gallery of every Bond film, ranked from worst to best, to see where we listed your favorite.