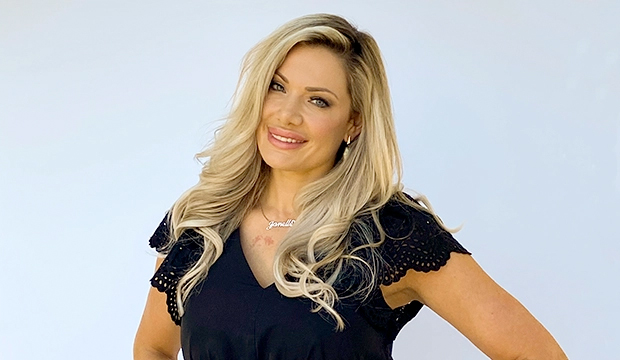 The queen has fallen. Three weeks after entering the “Big Brother 22” house, Janelle Pierzina was shown the door by her All-Star housemates during Thursday’s live eviction episode. The “BB” legend was evicted by a vote of 9-2 over her closest ally in the game, Kaysar Ridha. Janelle’s reputation as a cutthroat competition beast put a huge target on her back, but she managed to avoid the chopping block until Head of Household Tyler Crispin ultimately destroyed her game. Ever the “BB” diva, Janelle was dressed to the nines as she met up with host Julie Chen Moonves for her exit interview.

“The one and only, legendary Janelle was just evicted,” Julie gushed before asking if Janelle’s choice of clothing meant she knew she was doomed. “I did have a change of clothes,” the veteran player responded. “I picked one of my easy-zip dresses so I could whip into athletic gear if I needed to. If I come out of here I’m not coming out of here without a cocktail dress on!”

Next Julie asked if Janelle knew which two houseguests voted to keep her in the game. After incorrectly guessing Da’Vonne Rogers and Bayleigh Dayton, she missed a second time with Memphis Garrett and Kevin Campbell. When finally realizing it was Dani Briones and “the New Jersey guy” (Enzo Palumbo) she blurted out, “I’m so confused.”

Changing gears, Julie asked if Janelle went into the house with a plan to work with old school players or if the game just developed that way. “I had wanted to work with Tyler because he seems like such a great player,” she responded. “But I had Kaysar and he wasn’t really interested in working with newer players. I was naturally drawn to Keesha (Smith) because she’s similar to me. There was definitely a connection with the four of us (including Memphis), the OGs.”

When delivered the news that Memphis was actually part of the alliance responsible for Janelle’s demise, she appeared hurt and impressed at the same time. “I’m blown away, good job Memphis!” she applauded while admitting she’d been tricked. Following some (mostly) kind messages from her fellow houseguests, Janelle expressed concern for her longtime friend Kaysar’s game. “He’s gonna tell Memphis everything! This is terrible.”