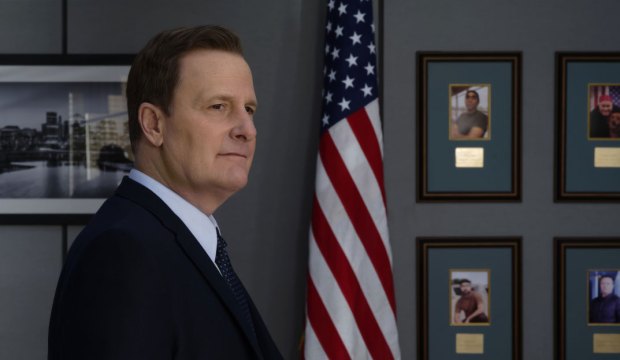 While America and the world have been on the edge of their proverbial seats anticipating the looming US presidential election (among other breaking news stories), Showtime pounced to premiere its two-night limited series “The Comey Rule” on September 27 and 28, just five weeks out from the most heated and divisive presidential contest in decades.

“The Comey Rule” is based on former FBI Director James Comey‘s tell-all book “A Higher Loyalty,” adapted by writer and director Billy Ray (“Captain Phillips” and “Richard Jewell”). It is a riveting exposé on the controversial role played by Comey and the FBI in shaping the events leading up to the surprise victory of President Donald Trump over his Democratic rival Hillary Clinton. It also deftly depicts the political machinations behind the scenes during the transition from former President Barack Obama to the current administration and Comey’s ultimate firing by President Trump.

The series boasts an all-star cast playing familiar names like Jeff Daniels as Comey, Brendan Gleeson as Trump, Kingsley Ben-Adir as Obama and Jennifer Ehle as Comey’s wife Patrice Comey, among many others. Critics have praised the series’s cast, particularly leading man Daniels. For instance, Nell Minnow (RogerEbert.com) says the actor “is especially good at showing us Comey’s thoughtful, accessible, reassuringly calm expression when faced with terrible problems and pressures.” And Brian Lowry (CNN) adds that he “is especially good in displaying Comey’s quiet discomfort over Trump’s attempts to woo him”

“The Comey Rule” also proved to be a ratings hit, seen by over one million viewers (cable and streaming) to date, beating “Escape From Dannemora” as the network’s highest rated limited series debut ever. So now savvy awards watchers have their eyes on other voters: Golden Globe, SAG and Emmy voters.

There’s a good chance the Globes might go all-in for the series, just like they did for Showtime’s last political expose “The Loudest Voice,” for which Russell Crowe won earlier this year in the role of Fox News chairman and CEO Roger Ailes. I think Daniels is already a lock for a nomination, with his potential competition including recent Emmy winner Mark Ruffalo (“I Know This Much is True”) and nominees Hugh Jackman (“Bad Education”), Paul Mescal (“Normal People”) and Jeremy Pope (“Hollywood”). The Globes  certainly love Daniels, having nominated him four times before — for the films “The Purple Rose of Cairo” (1986), “Something Wild” (1987) and “The Squid and the Whale” (2006), and for his leading role on the HBO drama series “The Newsroom” (2013).

At the SAG Awards, lead and supporting performances are grouped together, which makes it tougher to make an impact. SAG also inexplicably does not have a separate category for ensembles in limited series and TV movies. However, Daniels could still make an appearance, as SAG voters have also shown their affection for him with recent individual nominations for “The Newsroom” in 2013 and 2014 and Netflix’s “Godless” in 2018.

When it comes to the Emmys, while the series’s fate will depend on the slate of programs that will premiere between now and May 2021, “The Comey Rule” could still be a dark horse contender for Daniels. He previously prevailed for “The Newsroom” (2013) and “Godless” (2018), and was also nominated for playing another FBI official, counterintelligence chief John O’Neill, in “The Looming Tower” (2018), so he’ll be a contender to watch out for there as well.