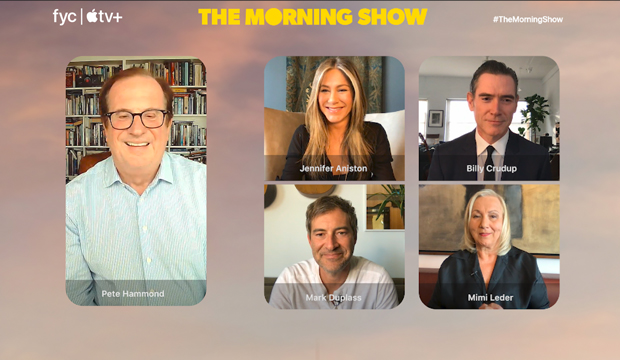 Hey, “The Morning Show” fans, mark your calendars for Tuesday, August 18 at 6 p.m. PT, as that’s when you can join Emmy-nominated cast members Jennifer Aniston, Mark Duplass and Billy Crudup plus director Mimi Leder for a special virtual conversation. Deadline’s Pete Hammond is set to moderate the socially distanced discussion for Apple TV Plus. Emmy voters and guild members can sign up via this link, but note that tickets are being allocated on a first-come, first-served basis until capacity is reached. Watch an exclusive video clip below.

Gold Derby has already unveiled the specific episodes that have been submitted for Emmy voters to watch and judge: “In the Dark Night of the Soul It’s Always 3:30 in the Morning” (Pilot) for Aniston, “The Interview” for Duplass, “Chaos Is the New Cocaine” for Crudup and “Lonely at the Top” for Carell. In addition, guest star Martin Short is nominated for “Chaos Is The New Cocaine” and Leder, a two-time winner for “ER,” is up for directing “The Interview.” All of these episodes can be viewed at the online Emmy portal or on Apple TV Plus. The show’s other two nominations are for main title design and production design.