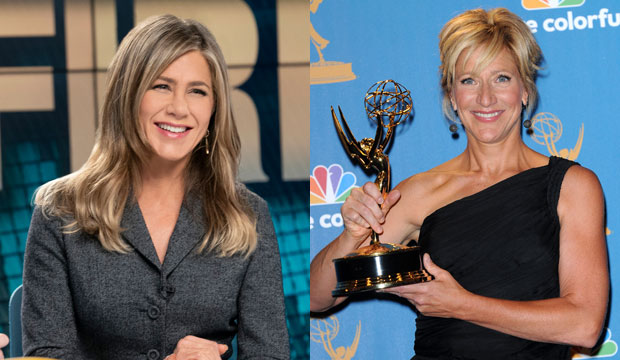 For Jennifer Aniston, the Emmys are serious business. At least, they are now. She’s one of the top contenders for Best Drama Actress for her leading role on Apple TV+’s “The Morning Show.” This comes 18 years after she won Best Comedy Actress for “Friends” in 2002. It would be a rare feat for a leading lady to win Emmys for both a drama and comedy series. In fact, the only actress who has ever done it before is Edie Falco. Will Aniston be the second?

Falco won her Emmys in the opposite order. She claimed three Best Drama Actress prizes for “The Sopranos” (1999, 2001, 2003) before claiming Best Comedy Actress for the hospital dramedy “Nurse Jackie” (2010). But even that comedy victory, for playing the title health care worker with an addiction to pain medication, was tinged with drama like a lot of other seriocomic acting winners in recent years like Toni Collette (“United States of Tara”) and Jeffrey Tambor (“Transparent”).

Aniston, on the other hand, took a 180-degree turn from Rachel Green in the multi-camera network comedy to embattled TV personality Alex Levy in Apple’s flagship drama. Alex finds herself struggling with the moral compromises and power struggles of corporate media in the series, getting the kinds of juicy, indignant speeches awards voters often love. And many of the acting peers in the TV academy who will be voting for her can probably relate to Alex’s struggles in the TV business.

Her industry peers have already backed her up for “The Morning Show.” She won at the SAG Awards earlier this year for this performance, and that organization also nominated her recent dramatic turn on the big screen in “Cake” (2014). And long before that she stretched her dramatic range with her Independent Spirit Award nominated performance in “The Good Girl” (2002) — justice for “The Good Girl”! — so in a sense she’s overdue for these serious kudos. No kidding.