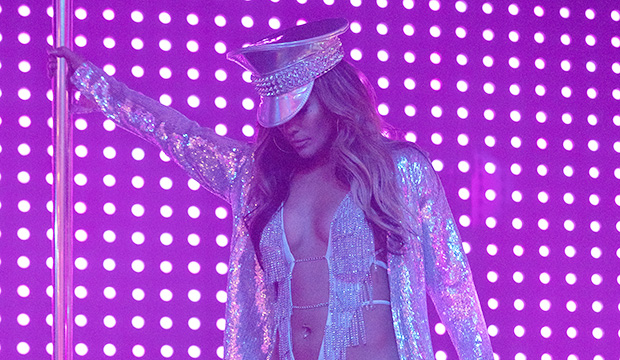 When “Hustlers,” Jennifer Lopez‘s first big-screen non-animated hit in ages at the Toronto film festival last fall, critics were falling all over themselves to find the words to describe how sensational she was as a leader of a gang of Big Apple grifter strippers.

The reaction of Justin Chang of the Los Angeles Times to Lopez’s pole-dancing routine that opens the truth-based movie of economic survival was typical: “As Ramona, a one-woman supernova who reigns over a New York strip club, Lopez gives her most electrifying screen performance since ‘Out of Sight,’ slipping the movie into her nonexistent pocket from the moment she strides out onto a neon-lighted stage in a rhinestone suit.”

The O-word — Oscar — popped up in many of the reviews that lauded both the 50-year-old actress’s ability to defy gravity while slithering around a pole onstage as well as her ability to bring alive a real-life female Robin Hood to life while seducing moviegoers while injecting Ramona with both ambition and grit while getting us to root for her and her girls.

SEEDon’t weep for J.Lo and Eddie Murphy — their real trophies are their revived acting careers

Lopez, whose skill set also includes dancing and singing, would go on to be nominated  in the  supporting actress category for a Golden Globe, an Independent Spirit Awards and Screen Actors Guild Award. But when the Oscar ballot was announced, her name was nowhere to be seen.

All the praise she got was way overdue, given that Lopez really hasn’t been appreciated as a actress in since early in her career. She did get glowing notices when she and fellow singer-dancer Shakira heated up the Super Bowl halftime stage. But that couldn’t make up for the fact that her comeback was slighted.

Leave to the one and only Oprah Winfrey, who was Oscar-nominated herself for her debut in 1985’s “The Color Purple,” to ask Lopez how she felt about her snub. “I was a little sad because there was a lot of buildup to it,” she told Winfrey during the former daytime talk-show queen at Oprah’s 2020 Vision Tour. “There were so many articles, I got good notices — more than ever in my career — and there was a lot of, ‘She’s going to get nominated for an Oscar, it’s going to happen, if it doesn’t, you’re crazy.’ I’m reading all the articles going, ‘Oh my god, could this happen?’ And then it didn’t and I was like, ouch,’ it was a bit of a letdown. Also, I felt like my whole team — most of my team has been with me for years, 20, 25 years — and I think they had a lot of hopes on that and they wanted it, too, so I felt I let everyone down a little bit.”

How did this multi-talent decide to handle her and her team’s disappointment? By looking on the bright side of her multifaceted career as an artist. “I had to re-examine like, ‘Why do you do this, what are you so sad about now?” Her answer? “You just had the most amazing year of your life — you just had the biggest opening of a movie in your career, you just walked the runway in Milan and had a fashion moment (in her iconic green Versace dress that she wore to the 2000 Grammys), you’re doing the Super Bowl in a couple of weeks, what is it?”

The upshot of what Lopez went through? “You want people to say you did a good job, and I realized, ‘ No, you don’t need that, you do this because you love it,’ eventually realizing, ‘I don’t need this award right here to tell me I am enough.’ “

Lopez has another film, a romantic comedy titled “Marry Me,” that she also produced and has recorded songs for a soundtrack . It is based on a graphic novel about a pop superstar who gets jilted by her rock-star fiance right before they are about to wed on stage at Madison Square Garden. She then gets hitched to a random guy in the crowd instead. The movie that is supposed to be out this year co-stars Owen Wilson, Sarah Silverman and Jimmy Fallon.

And her reality talent show on NBC that she executive-produces, “World of Dance,” is renewed for a fourth season.

The Young Cast ('World of Dance' Duels): 'I didn't know you had it in you,' said Jennifer Lopez about…

'World of Dance' Duels preview: Jennifer Lopez thinks GRVMNT had the most moves of any 90-second routine…

'World of Dance' recap: 'The Duels 2' continued the epic dance battles, but who deserved a shot at…

'World of Dance' Duels preview: Jennifer Lopez says Jake and Chau 'pushed the boundaries,' but what…

'World of Dance' recap: 'The Callbacks' gave contestants one more chance to impress the judges, or else…

'World of Dance' performance: Project 21 had great 'energy,' according to Jennifer Lopez, but was it…