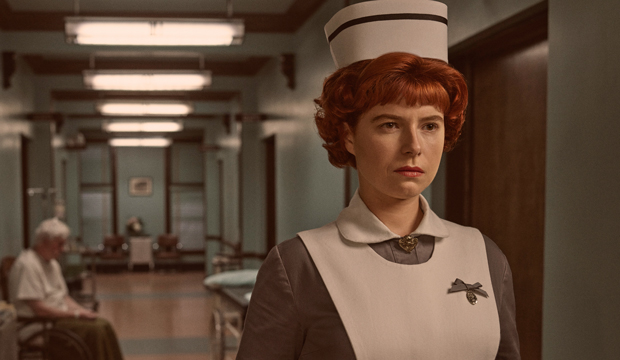 Season 4 of “Fargo” centers on a brewing war in 1950s Kansas City between the Italian mob, led by dueling brothers Josto Fadda (Jason Schwartzman) and Gaetano Fadda (Salvatore Esposito), and a Black crime syndicate helmed by Loy Cannon (Chris Rock). Buckley features prominently in the escalating tensions as she cozies up to Josto and butts her way into the life of high-schooler Ethelrida Pearl Smutney (E’myri Crutchfield), whose parents owe Loy Cannon money.

In the first four episodes alone, Buckley establishes herself as a magnetic force who commands the screen with her off-kilter charisma. Nurse Oraetta gets a memorable introduction in the premiere episode, offing Josto’s father while he recovers from a gunshot wound and sucking the ring off his finger as a trophy of the kill; she later delivers to Ethelrida Pearl a home-made pie laced with ipecac syrup. In the subsequent weeks, Oraetta starts an affair with Josto, complete with a rousing a cappella rendition of “Battle Hymn of the Republic” and some light asphyxiation. As the season progresses, no doubt show-runner Noah Hawley has more brilliant material for her in store.

In a season that already boasts an incredible, award-minted ensemble with the likes of Rock, Ben Whishaw, and Glynn Turman, Buckley’s outrageous performance just might outshine them all. Critics seem particularly taken with her performance: Ben Travers (IndieWire) highlights the “endless delight in dissecting Buckley’s juicy scenes,” while Matthew Gilbert (Boston Globe) writes that she plays her character “with an almost joyous energy that is simultaneously funny and disturbing.”

SEE Oscar spotlight: ‘I’m Thinking of Ending Things’ may be the most weirdly ideal awards contender for the COVID era

Such a star turn from an already-rising star––Buckley earned a BAFTA nomination for the 2018 film “Wild Rose” and delivered an acclaimed performance in this year’s “I’m Thinking of Ending Things”––positions Buckley incredibly well for the upcoming winter awards. She may miss out on a SAG nomination because actors have never seemed to warm to “Fargo” in the past, but she’s especially competitive at the upcoming Golden Globes.

Our current combined Golden Globes odds have Buckley in third place, just behind Gillian Anderson (“The Crown”) and this year’s Emmy-winner Uzo Aduba (“Mrs. America”). She notably leads Emmy nominee Helena Bonham Carter (“The Crown”) and Emmy winners Annie Murphy (“Schitt’s Creek”) and Julia Garner (“Ozark”), in part because of the Hollywood Foreign Press Association’s affinity for the series, which has landed eight acting nominations and wins for Thornton and Ewan McGregor. Another “Fargo” victory at the Globes for Buckley would be just as richly deserved.