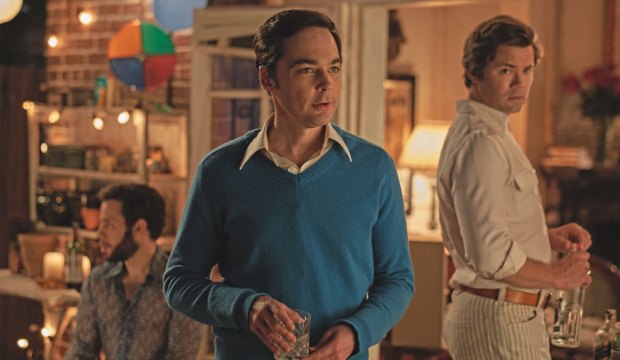 A Tony nomination eluded Jim Parsons when the revival of “The Boys in the Band” played Broadway in 2018. But sterling reviews for the Netflix film adaptation, and a streaming-centric year in film, could mean that the actor will have the last laugh and be recognized at the Oscars instead.

Parsons plays Michael in the seminal gay story from the late Mart Crowley. It is the pre-Stonewall year of 1968, and Michael has invited a group of friends to his Manhattan apartment to celebrate his bestie Harold’s (Zachary Quinto) birthday. As the party turns chaotic, Michael convinces the guests to play a game where each man must call the person they truly love.

Critics fell in love with Parsons’ portrayal of the self-hating Michael. Owen Gleiberman (Variety) claims that the actors “tormented passion” holds the film together. He elaborates that “at times he’s like Paul Lynde as a frazzled artiste, snapping at his guests and at himself. But Parsons, bouncing from delight to rage and back again, with that twang of insolence and that timing so perfect he doesn’t just tell a joke, he sings it.” Ryan Lattanzio (IndieWire) adds that “The Big Bang Theory” actor is able to shed his former persona to stand out in the large ensemble. “The performances are all superb,” says Lattanzio, “but this is Parsons’ show.”

Parsons long run on TV’s “The Big Bang Theory” could be exactly what lands him in the middle of the Oscar race for Best Actor. Academy voters love it when actors give an unexpected performance. This dramatic turn in “Boys in the Band” is just the latest in a series of heavier roles for the classically trained actor. He was Emmy nominated for his performances in “The Normal Heart” (another important adaptation of a gay drama which he also starred in on Broadway) and “Hollywood.” “The Boys in the Band” makes for a satisfying cap to this dramatic trilogy of queer roles.

Sure, it could be argued that Netflix has too many contenders in the race and this role could get lost in the lineup. Indeed “The Boys in the Band” isn’t even Netflix’s only Broadway adaptation, as the musical “The Prom” debuts on December 4 and August Wilson’s “Ma Rainey’s Black Bottom” will follow on December 18.

But Netflix is uniquely positioned for Oscar domination in a year when the pandemic has shuttered movie theaters across the country. With a majority of studio pictures sitting this year out, streaming services are poised to pounce on the Oscar race in a huge way. Parsons could be just one of several Best Actor nominees for the streamer.