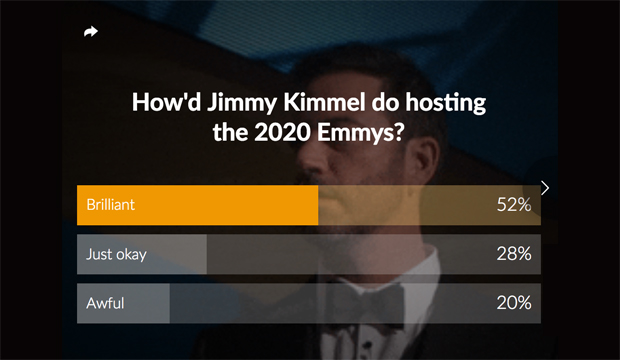 After more than 70 years of in-person ceremonies, the Emmys were forced to go semi-virtual in 2020 because of the coronavirus pandemic. And apparently ABC chose the best person for the job, as a majority 52% of Emmy viewers said Jimmy Kimmel was “brilliant” hosting Sunday’s night show. Conversely, 28% thought the “Jimmy Kimmel Live” star was “just okay” while the other 20% of haters voted he was “awful,” according to our recent poll results. What did you think of Kimmel’s third time as Emmys host? Sound off down in the comments section.

In his review of the broadcast, Gold Derby contributor Tony Ruiz noted, “Kimmel presided over a near-perfect Emmy ceremony, one that met the challenge of the moment without sacrificing humor and entertainment … his ability to balance the seriousness of the moment with true comic highlights made him the ideal host for this particular event.” And our managing editor Chris Beachum had to this to say about Kimmel’s hosting skills: “Congrats to Jimmy and ABC! The show is running right on time.”

Kimmel’s opening monologue was like no other. Audience reactions from past Emmys ceremonies were intercut with Kimmel’s live monologue. Finally, when he saw a clip of himself laughing in the audience, the proverbial curtain fell and Kimmel confessed to being alone in the Staples Center. “This isn’t a MAGA rally, it’s the Emmys!” he announced. His notable jabs were about doing an awards show during a pandemic, Norman Lear being the oldest Emmy winner ever and the taboo-sounding name of “Schitt’s Creek.”

ABC bucked a recent Hollywood trend of producing awards shows with no hosts, which started with the Oscars in 2019 (and again in 2020). The Emmys hopped on the bandwagon in 2019 by nixing a host for the first time in 16 years when Fox aired the broadcast. The SAG Awards soon followed suit; this year they said no to an emcee after finally hiring ones in 2018 (Kristen Bell) and 2019 (Megan Mullally). The Golden Globes are the only major ceremony to stick with a host, inviting back Ricky Gervais earlier year and Tina Fey & Amy Poehler for the upcoming 2021 kudos.

Throughout the 21st century, Emmy hosts have almost always been comedians (see the list below). They bring just the right tone of roasting the nominees while still celebrating the best of television. With a four-way rotation of ABC, CBS, Fox and NBC, the host selection also typically comes from that network’s stable of talent. The last Emmy hosts were “Saturday Night Live” stars Colin Jost and Michael Che for NBC in 2018. Before them, Stephen Colbert oversaw CBS’s 2017 ceremony, Kimmel for ABC in 2016 and 2012 and Andy Samberg for Fox in 2015.