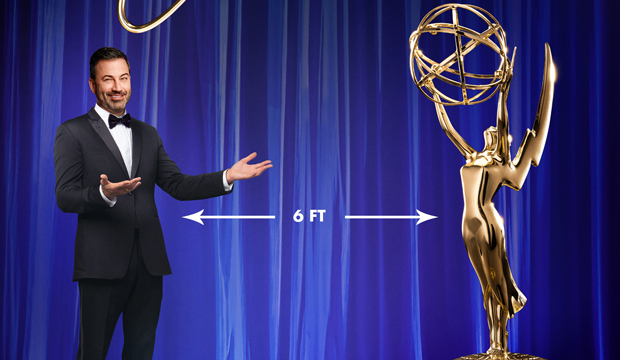 Sunday night on ABC, Jimmy Kimmel returned to host the Primetime Emmy Awards for the third time. The “Jimmy Kimmel Live” star previously emceed TV’s biggest night in 2012 and 2016, the last two times the alphabet network aired the annual broadcast. Of course, this ceremony was completely different as the 2020 Emmys featured a mix of in-studio moments and virtual speeches due to the worldwide Covid-19 pandemic. Now that we’ve seen a socially distanced Kimmel in action, what did YOU think? Vote in our Emmys host poll below.

Among Kimmel’s many jokes in his opening monologue were jabs about doing an awards show during a pandemic, Norman Lear being the oldest Emmy winner ever and the taboo-sounding name of “Schitt’s Creek.” Audience reactions from past Emmys ceremonies were intercut with Kimmel’s live monologue. “This isn’t a MAGA rally, it’s the Emmys!” he finally announced after the proverbial curtain fell.

By announcing Kimmel as the ringleader of the 72nd Emmys, ABC bucked a recent Hollywood trend that’s cooler than avocado toast: awards shows with no hosts. The Oscars started it all in 2019 (and again in 2020) when they nixed the concept following back-to-back years of Kimmel presiding over the ceremony. Their little sister Emmy hopped on the bandwagon in 2019 by denying a host for the first time in 16 years when Fox aired the broadcast. The SAG Awards soon followed suit; this year they said no to an emcee after finally hiring ones in 2018 (Kristen Bell) and 2019 (Megan Mullally). The Golden Globes are the only major ceremony to stick with a host, inviting back Ricky Gervais earlier year and Tina Fey & Amy Poehler for the upcoming 2021 kudos.

SEEEmmys 2020: Who are the 20 presenters revealed plus the ‘In Memoriam’ performer?

Throughout the 21st century, Emmy hosts have almost always been comedians (see the list below). They bring just the right tone of roasting the nominees while still celebrating the best of television. With a four-way rotation of ABC, CBS, Fox and NBC, the host selection also typically comes from that network’s stable of talent. The last Emmy hosts were “Saturday Night Live” stars Colin Jost and Michael Che for NBC in 2018. Before them, Stephen Colbert oversaw CBS’s 2017 ceremony, Kimmel for ABC in 2016 and 2012 and Andy Samberg for Fox in 2015.

We know what you’re thinking: that’s a lot of men! Indeed, only two women served as solo Emmy hosts in the past two decades: Jane Lynch for Fox in 2011 and Ellen DeGeneres for CBS in both 2005 and 2001. Another female, Heidi Klum, was tasked with presiding over one-fifth of ABC’s 2008 ceremony along with the year’s other Emmy-nominated reality TV hosts, Tom Bergeron, Howie Mandel, Jeff Probst and Ryan Seacrest.