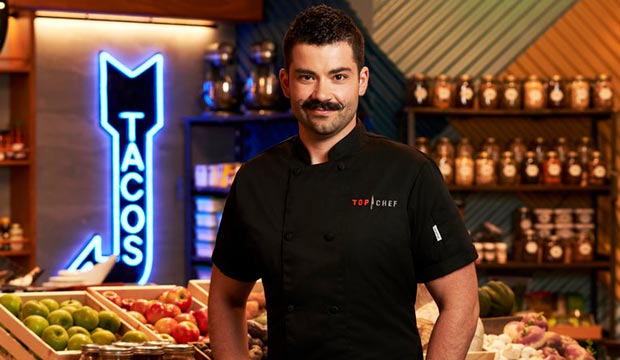 When you are faced with a season of “Top Chef” All-Stars who just missed taking the top prize, it’s going to cut deep when the first returnee has to go. That is the case of Joe Sasto, a Los Angeles-based chef who came in third on Season 15, which took place in Colorado. Known for his handle-bar mustache and knack for making fresh pasta, Joe won four elimination challenges and one quickfire during his first time on the Bravo reality show but was sent home for his vegetarian beet dish that he served at Aspen’s Food & Wine Classic. This specialist in modern Italian cuisine has worked in a three-Michelin star restaurant and did we say that he really likes to make his own pasta?

But he got in trouble during the quickfire challenge when he took the risky step of making pasta without knowing exactly how long he had to roll it out as well as cook it. A not-very-pleased Padma Lakshmi  disparaged his attempt at homemade noodles for being “doughy, dry and chewy.” Luckily, the rest of his team made up for his flaws.

SEE ‘Top Chef: Kentucky’ winner Kelsey Barnard Clark is the 5th woman to take the title — and is a fan favorite, too [INTERVIEW]

But then Joe also got in trouble during the elimination challenge by making an underdone flatbread and then drowning it in aioli. His teammate Lee Anne Wong had her flubs as well. During the quickfire she failed to fry her tempura properly and then made a rather bone-headed move in the elimination challenge by putting her fish on an open fire without oiling it down the grill first. She then poured oil directly on the fish, causing the flames to roar and giving her seafood an off-putting burnt taste.

Joe, however, took his loss with grace. As he said during his exit interview, “Being eliminated first sucks, but it’s always what you make of it. If you go out doing something really dumb, you got to live with that. If you go out because everyone cooked really good food then you got to be proud of still what you did and stand by that. I don’t think there is anything negative to be seen by being the first one eliminated. ‘Top Chef’ is a once in a lifetime experience and here we all are doing it for a second time in the same lifetime. I mean, that’s an accomplishment by itself.”