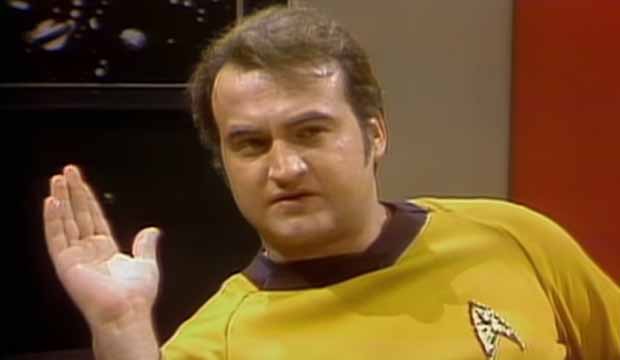 The world became a little less funny on March 5, 1982 when the brilliant comic actor/singer John Belushi died of a lethal injection of heroin and cocaine. He was just 33. The wild and crazy Belushi came to international fame in 1975 as one of the original seven Not Ready for Primetime Players on “Saturday Night Live” bringing to life such character as Samurai Futuba and Pete the Olympia diner counterman who  only served “cheesebugga, cheesebugga.”

Movie audiences fell in love with him as the gross, insanely funny frat-house animal “Bluto” Blutarsky in 1978’s “Animal House” and as “Joliet” Jake Blues, front man for the Blues Brothers, and brother of Elwood Blues (Dan Ackroyd). And even before “SNL,” Belushi was the anchor for Chicago’s esteemed Second City improv, the irreverent “The National Lampoon Radio Hour” and Lampoon’s off-Broadway hit “Lemmings.”

He is now the subject of the documentary “Belushi,” which premieres Nov. 22 on Showtime after screening at the Tribeca Film Festival and the Chicago International Film Festival. “Belushi” is written, directed and produced (with John Battsek) by award-winning documentary filmmaker R.J. Cutler (“A Perfect Candidate,” “The September Issue” and “The World of Dick Cheney”). It recently received three Critics Choice Documentary Awards nominations including Best Documentary Feature and is currently at 94% fresh on Rotten Tomatoes.

Cutler had the complete cooperation of the comic’s widow Judy Belushi Pisano who allowed him to go through an archive filled with letters, photos, film footage and a treasure trove of audio tapes of interviews conducted after John’s death by Pisano, as well as those done by author Tanner Colby for their 2005 book “Belushi: A Biography.” He recently talked to us about “Belushi.”

Susan King: I have to admit I got misty-eyed at the opening of “Belushi” where you have footage of the Blues Brothers’ performing as the opening act for Steve Martin in 1978 at the Universal Amphitheatre.  I was there back in 1978 and also saw them in concert at Universal two years later. Both were memorable nights.

SK: I find Belushi still so contemporary as a performer. You could take Bluto from “Animal House” for example and put that character in a new movie and he would fit in perfectly. His comedy has not dated.

RJC: I so agree with you. You know how I would describe it: he was simultaneously of his moment and so far ahead of his moment. He was of his time and so far ahead of his time. I mean, look, let’s face it. Lorne Michaels deserves all the credit for creating and sustaining ‘Saturday Night Live’ decades into its run. Lorne Michaels has changed American comedy and has held a lofty place at the center of our culture for decades, but it was John that first assembled the Not Ready for Prime-Time Players as the cast of ‘The National Lampoon Radio Hour.’  It was John whose vision saw how that group of people could work together and that group of people considered John their leader and the visionary who gathered them. That vision kept growing and changing and being challenged by John. I don’t just mean ‘Saturday Night Live,’ I mean throughout his whole career. We got a sense that he would carry on reinventing himself, taking on new challenges, the way great artists do, for the rest of their life.”

SK: You were so fortunate that you had access to the audio tapes, photos, letters and other Belushi items.

RJC: When Judy agreed to allow us to make the film, she invited us up to Martha’s Vineyard. She barbecued us a delicious dinner and then after dinner, she brought us into the basement of her home where she kept John’s archive. It was really just boxes in the basement. We started opening them up and looking through them. That’s when we found the letters, that’s when we found the photos. That’s when we found the audio tapes that were part of the oral history, she and Tanner Colby had put together. And thank goodness. She gave us, in that moment, permission to use whatever we wanted and then trusted us to make the film. You need the trust of the subject, if you are going to make these movies. It’s central.

SK: A lot of those taped interviews were from the ‘80s.  His friends and co-workers were still in pain over his death and are often brutally honest especially when it came to his growing drug problems. If you interviewed these people today, time would have colored their memories of Belushi.

RJC: Before I even got to visit Judy, I started to work on the film and conducted a number of conversations, not interviews, because I wasn’t recording then, but conversations with key figures from John’s life. Everybody was telling me stories that were kind of lost in the foggy haze of memory. They lacked immediacy. They lacked the rawness and the presence that I desperately wanted for this film, what I knew this film had to have. The story tended to be ‘Here’s my John Belushi story.’ They were stories that had been told and told and told and told.

SK: And those stories tend to be boring.

SK: Jane Curtin talks about how difficult Belushi was to work with on the show. And I was shocked to know he treated the female writers poorly. Did you find out why he acted that way? Was it his drug use?

RJC: I can’t answer that. I can’t speak to the why of John’s behavior. I can’t tell you that, as Lorne says, that was a very, very difficult time. Lorne himself describes it as a descent into hell. Judy describes it as a more specific and more personal situation involving specific people. Judy disagrees with the blanket description. But ours is not to answer why, but to reflect the reality of what it was.

SK: Drug use was so prevalent in those days, but there was very little help for addicts.  Even Judy, the love of his life, couldn’t help him.

RJC: You put your finger on something, I think, that’s very significant, which is the culture was very different then, in terms of addiction. The Betty Ford Center opened the year John died. It was not a culture that understood addiction. It was a culture that stigmatized addiction. John was an addict and he needed the hep that addicts need to overcome it. He needed real support and assistance to rely on and sustain. That’s what you see in the film.