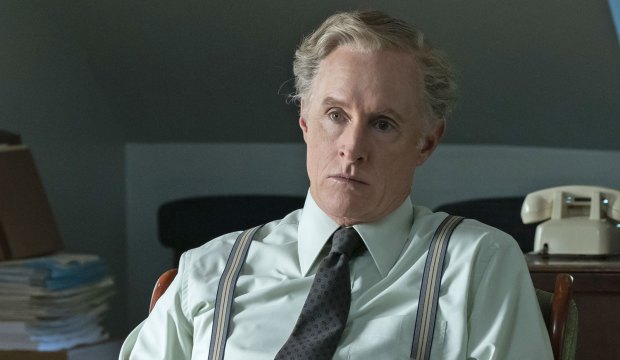 “Mrs. America” tells the story of the women who fought for and against the Equal Rights Amendment, but male standout John Slattery could be among the Emmy winners for the political docudrama. And he’s had an IOU for a decade, ever since he was on another period drama, AMC’s “Mad Men.” Will he cash it in for his overdue first win?

“Mad Men” was an unusual Emmy paradox. It won a record-tying four Emmys for Best Drama Series, but year after year it would lose all of its acting nominations until the final season in 2015 when Jon Hamm won Best Drama Actor in the show’s first and only performance victory. Among his unlucky co-stars over the years was Slattery, who contended for Best Drama Supporting Actor four times in a row (2008-2011) for playing advertising executive Roger Sterling.

Now Slattery is a contender for Best Movie/Limited Supporting Actor for playing Fred Schlafly, the husband of conservative activist Phyllis Schlafly (Cate Blanchett). Being the most prominent man in a predominantly female cast may help him stand out on the ballot, in addition to voters’ possible desire to make it up to him after his “Mad Men” losses.

SEEAmma Asante (‘Mrs. America’ director) on how shooting the Schlafly vs. Friedan debate was just as challenging as recreating the ’72 convention [EXCLUSIVE VIDEO INTERVIEW]

Most of the Expert journalists we’ve surveyed as of this writing predict Slattery to be nominated, and two of them say he’ll win: Joyce Eng (Gold Derby) and Kaitlin Thomas (TVGuide.com). But he’s got even more support from our elite derbyites. Six of our Top 24 Users who got the highest scores predicting last year’s Emmy nominations say he’ll win. So do seven of our All-Star Top 24 who got the highest scores when you combine predictions from the last two years.

Slattery faces of a tough challenge from scene-stealer Jim Parsons (“Hollywood”), who is the current front-runner based on the predictions of all of the thousands of users who have placed their bets. But “Hollywood” has a number of other supporting actors including Darren Criss, Joe Mantello and Dylan McDermott, so if multiple are nominated, there’s a chance they could split their votes, opening the door a little wider for Slattery. Do you agree with our Experts and users who say he’ll collect his first trophy?

MAKE YOUR PREDICTION: Who'll win Emmy for Best Movie/Limited Supporting Actor?
To save your prediction, you must log in to Gold Derby. Click here to sign in with existing account -- or create a new one.
PREDICTthe 2020 Emmy nominees now; change through July 28