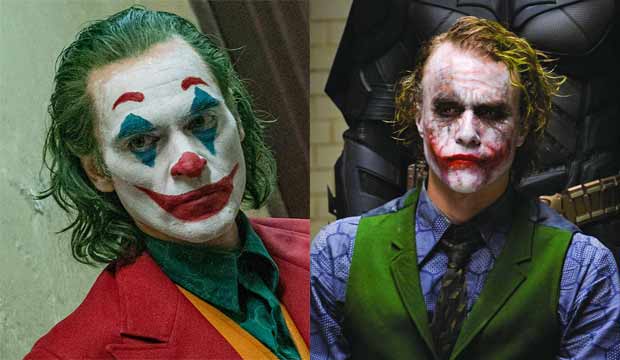 After his win for Best Actor at the Golden Globes, it looks as if Joaquin Phoenix is well on his way to snaring his first Oscar for his disturbing portrait of a deranged wannabe stand-up comic who transforms into Batman’s arch nemesis in “Joker.”

The former child star has been nominated three times previously, as a supporting actor in the 2000 historical epic “Gladiator” and for lead actor in both the 2005 Johnny Cash biopic “Walk the Line” and as alcoholic war vet who has ties to a cult in 2012’s “The Master.” But this physically demanding comic-book role for which he lost over 50 pounds may finally do the trick.

Several other actors on TV and in movies have played the Joker previously, including Jack Nicholson in 1989’s “Batman” and Jared Leto in 2016’s “Suicide Squad.” But only one performer earned an Academy Award for channeling the comic-book supervillain. That would be the late Heath Ledger, who earned a posthumous Oscar for his take on the Clown Prince of Crime in 2008’s “The Dark Knight.”

SEE Violent movies nominated for Best Picture at the Oscars

If Phoenix does take home the statuette, it would be rather historic. It would be only the second time two actors won Hollywood’s highest honor for playing the same character.  The most satisfying example of two performers putting their stamps on the same character is when Marlon Brando in the original “The Godfather” in 1972 and Robert De Niro in “The Godfather Part II” in 1974 won for playing older and younger versions of Don Vito Corleone. Brando took the lead prize while De Niro earned a supporting honor. That’s a true win-win.

Many more performers, however, have also been nominated for the same part in the past, sometimes in the same movie. But the characters usually result in just one win at the most. That situation could arise this year if Saoirse Ronan is up for her take on Jo March in “Little Women.” Winona Ryder was previously nominated as the ambitious wordsmith who pens plays in the attic in the 1994 version but lost to Jessica Lange in “Blue Sky.”

Here is a barrage of examples of characters who are responsible for at least two Oscar nominations and sometimes three.

1. Laurence Olivier and Kenneth Branagh were both nominated for portraying “Henry V” in the 1944 and 1989 versions of Shakespeare’s play. They also both happened to be the directors of their films and were nominated for helming as well.

2. The remakes of “A Star Is Born” have provided plenty of Oscar opportunities for the actors who play the leads of the female ingenue and the washed-up actor. Last year, Lady Gaga joined both Janet Gaynor (1937 version) and Judy Garland (1954) in receiving an Oscar ballot spot. Meanwhile, Gaga’s co-star Bradley Cooper — whose character is a down-on-his-luck musician — and Garland’s love interest James Mason also were nominated for basically the same part.

3. Leading lady Kate Winslet and supporting player Gloria Stuart were both on the ballot for playing the young and elder Rose DeWitt in 1997 “Titanic.” Neither took the prize.

SEEKeep it real? Or can Joaquin Phoenix (‘Joker’) crush this recent Oscar trend?

4. In 1999, two nominated actresses played the same queen. Cate Blanchett was nominated for Best Actress as a youthful queen in “Elizabeth” while Judi Dench played a senior version of Henry VIII’s daughter in “Shakespeare in Love” and was crowned Best Supporting Actress. Blanchett would go on to become the only actress to be nominated twice for the same character when she reprised her role as Queen Elizabeth I in 2007’s “Elizabeth: The Golden Age.”

5. Charles Laughton, Robert Shaw and Richard Burton all played that chicken-leg-munching monarch Henry VIII and caught Oscar’s attention. Laughton sat on the throne in 1933’s “The Private Life of Henry VIII” and became the first British actor to win an Academy Award. Shaw went royal and earned a  supporting bid for 1966’s “A Man For All Seasons.” Burton played the gluttonous monarch in 1969’s “Anne of a Thousand Days” but lost to John Wayne in “True Grit.”

6. Raymond Massey wore the stove-pipe hat as Abraham Lincoln in 1940’s “Abraham Lincoln in Illinois” and made the cut for Best Actor while Daniel Day-Lewis would win a record third lead trophy for 2012’s “Lincoln.”

7. Anthony Hopkins and Frank Langella were nominated for their distinctive takes on on the disgraced 37th president Richard Nixon. Hopkins played the prez on a downward spiral while enmeshed in the Watergate scandal in 1995’s “Nixon” while Langella’s Tricky Dick is seen in interviews with British TV host David Frost after his 1974 resignation as he tries to salvage his legacy in 2008’s Frost/Nixon. Neither actor took the trophy.

9. Both Robert Donat and Peter O’Toole inhabited the beloved boarding school master Arthur Chipping in “Goodbye Mr. Chips.” Donat won a lead Oscar for the 1939 version while O’Toole had to settle being a nominee for the 1969 musical version. O’Toole was also nominated twice for playing King Henry II of England. He butted heads with Richard Burton‘s Archbishop of Canterbury in  1964’s “Becket”  and he was pitted against Katharine Hepburn as his imprisoned wife, Duchess Eleanor of Aquitaine, in 1968’s “The Lion in Winter.”

10. Kate Winslet would once more share a character in the same film with an older actress — namely, Judi Dench — in 2001’s “Iris,” a biopic about the Irish novelist Iris Murdoch who suffered from dementia in her later years. Winslet would compete as a supporting actress while Dench landed among the lead actresses, but neither would win.

11. The poetry-spouting  sword master allowed Jose Ferrer to become the first Puerto Rican and Hispanic actor to win an Oscar for his lead in 1950’s “Cyrano de Bergerac.” French actor Gerard Depardieu would also be nominated as a lead for a 1990 French version of the same tale.

12. Billiards player “Fast Eddie” Felson provided Paul Newman with two of his 1o Oscar nominations. He first played the pool shark in 1961’s “The Hustler” but would have to wait a few decades to win a lead statuette for his second go-round in the part in the 1986 sequel, “The Color of Money.”

13. Bing Crosby would originally play priest Father Chuck O’Malley and take home a Best Actor Oscar for the 1944 musical comedy-drama “Going My Way.” He would repeat the part in a 1945 sequel, “The Bells of St. Mary” and would earn a second nomination for his progressive priest.

14. Back before the Academy Awards had a rule against being nominated in both the lead and supporting acting categories in the same year, Barry Fitzgerald would compete in both for “Going My Way” as  veteran priest Father Fitzgibbon and would settle for a supporting win.

15. Jason Robards and Leonardo DiCaprio were both nominated for playing wealthy mogul Howard Hughes. Robards won a supporting prize for his part in the 1980 comedy-drama “Melvin and Me.” DiCaprio would be nominated for his lead part in 2004’s “The Aviator.”

17. Al Pacino was nominated twice for the role of Michael Corleone, as supporting for “The Godfather” and as a lead in “The Godfather Part II.”

18. Both Jeanne Eagels and Bette Davis were nominated for Best Actress for their work in the 1929 and 1940 versions of the melodrama “The Letter” as Leslie Crosby, an adulterous married woman married to a British plantation manager who is put on trial for killing her lover.

19. Sylvester Stallone would repeat his Oscar-nominated lead role as boxer Rocky Balboa from 1976’s “Rocky” in 2015’s “Creed”  as a mentor and a trainer to Apollo Creed’s son and received a supporting nod.

21. Kirk Douglas would be Oscar-nominated for a third time in lead role for his performance as troubled painter Vincent Van Gogh in 1956’s “Lust for Life.” After collecting three supporting actor nominations, Willem Dafoe received his first Best Actor nod as the artist in “At Eternity’s Gate.”

Oscarologists like to mention the example of Harold Russell, a real-life veteran who lost both his hands during World War II. He functioned by using prosthetic hooks instead. He was recruited to play an injured veteran adapting to civilian life in the 1946 Best Picture winner “The Best Years of Our Lives.” Russell became the only performer to ever win two Academy Awards for the same part. It was typecasting at its best and he was rewarded not just with a supporting Oscar but also an honorary statuette for “bringing hope and courage to our veterans.”