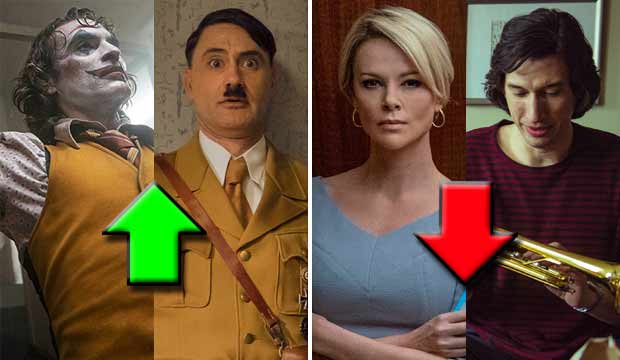 Awards season is coming fast and furious with this shortened Academy Awards calendar (the telecast is on February 9, earlier than ever). The Writers Guild, Directors Guild, Producers Guild and BAFTA nominations for film were all announced within a span of 24 hours, but did they drastically change the trajectory of the season? I think most of the top Oscar contenders are holding steady relative to where they were on Monday morning, while a couple got big boosts.

SEE2020 BAFTA Awards: Full list of nominations led by ‘Joker,’ ‘Once Upon a Time’ and ‘The Irishman’

“Jojo Rabbit” — Its nominations from the Writers and Producers Guilds were no surprise, but Taika Waititi‘s nomination from the Directors Guild is a major boon. He earned that nom over contenders like Noah Baumbach (“Marriage Story”), Greta Gerwig (“Little Women”) and Pedro Almodovar (“Pain and Glory”), so the film as a whole may be an even bigger contender than we’ve been anticipating all this time. The film was snubbed for Best Picture at the BAFTAs, but the British academy only has five nomination slots in its top category, and “Jojo” still got six noms overall there. Things are looking up.

“Joker” — An American film about a supervillain leading the BAFTA nominations with 11 is a coup, especially over a technically audacious British film like “1917,” and especially when last year’s awards-contending superhero movie “Black Panther” was skunked by the BAFTAs everywhere except Best Visual Effects. Todd Phillips missed at the Directors Guild, but that would’ve been a bit of a surprise despite his Globe nom. He nevertheless earned nominations from the Writers Guild and Producers Guild, so he’s doing just fine.

“Knives Out” — Rian Johnson‘s comedic murder mystery has been a hit with critics and at the box office, but it’s an uncharacteristic awards contender, so it has been on the bubble in our Oscar predictions for Best Picture and Best Original Screenplay. The good news is that it was nominated by the Writers Guild and Producers Guild, and Johnson made the cut for his script at the BAFTAs. A pretty good week for the whodunit.

“1917” — After it upset to win at the Golden Globes, it earned unsurprising nominations from the Producers Guild and Directors Guild, a surprising nom from the Writers Guild, and though it’s not the leading contender at the BAFTAs, it’s still up for nine awards including Best Picture. The World War I drama is hitting just about everywhere it needs to.

SEE2020 Producers Guild Awards nominations: Oscar frontrunners including ‘1917,’ ‘The Irishman,’ ‘Joker,’ ‘Once Upon a Time’

“Bombshell” — It was the only film in our top 10 Oscar predictions for Best Picture that was left out at the Producers Guild Awards (the aforementioned “Knives Out” got its slot). It also missed the cut for Best Original Screenplay at the Writers Guild Awards. It got three BAFTA nominations (for Charlize Theron, Margot Robbie and its makeup/hairstyling), but it’s starting to look like that might be its ceiling at the Oscars too.

“Marriage Story” — Its nominations from the Writers Guild and Producers Guild seemed like pretty much a given. That’s not nothing, but it is significant that Baumbach missed a Directors Guild nom and that the film isn’t up for Best Picture at the BAFTAs, though the British academy still nominated it five times. It’s still doing alright, but it seems like it might be drifting from the front of the pack of Best Picture contenders to somewhere in the middle.

SEE2020 Oscars scorecard: After DGA and PGA nominations, ‘Once Upon a Time’ still out front but watch out for ‘Joker’

“The Irishman” — Nominations from the Writers Guild, Producers Guild, and Directors Guild are all great news for the film, which maintains its position among the top tier of Oscar contenders. And it’s up for 10 BAFTAs including Best Picture and Best Director. However, Robert De Niro was snubbed for his leading role yet again. And the film also did great at the Golden Globe nominations only to be shut out. The key to moving up on the ledger at this point is for it to start winning at these events.

“Little Women” — This film has been hit-and-miss throughout the awards season (tons of Critics’ Choice noms, under-performed at the Golden Globes, shut out at SAG Awards), and this week’s flurry of nominations continues that trend of mixed results. It made it in at the Writers Guild and Producers Guild Awards, but Greta Gerwig was left out by the Directors Guild. And the film earned five nominations at the BAFTAs, but not Best Picture or Best Director. I could still imagine this movie getting two Oscar nominations just as easily as it gets 10. Things are still up in the air for the literary adaptation, but no more or less than before.

“Once Upon a Time in Hollywood” — The film has managed to hit just about everywhere, and that continued this week with nominations from the Producers and Directors Guilds, not to mention 10 nominations from the BAFTAs. It wasn’t nominated by the Writers Guild, but the WGA has such strict rules that the film wasn’t even eligible there, so its absence from that lineup doesn’t really mean anything. I’d say the film is holding steady as one of the top contenders this season, and so is …

“Parasite” — It has been doing great all season, but you always hold your breath for a foreign language film as unorthodox as this one. It keeps on scoring, though: it’s in at the Writers Guild, Producers Guild and Directors Guild Awards, and though it’s only nominated four times at the BAFTAs, that includes the key categories of Best Picture, Best Director and Best Original Screenplay — plus Best Foreign Language Film, of course. The Korean drama hasn’t had to worry about getting lost in translation.