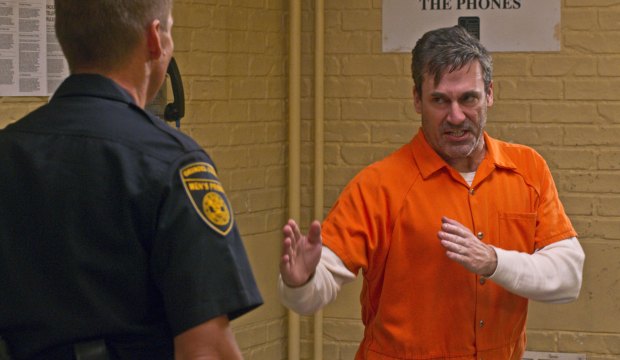 It took Jon Hamm ages to finally win his Emmy. “Mad Men” won Best Drama Series four times, but voters were notoriously stingy to its cast. It wasn’t until the last season that Hamm claimed Best Drama Actor for playing ad man Don Draper, which made him the first and only actor to win for the show. But while Don was brooding through 1960s New York, Hamm also proved adept at comedy and earned additional nominations for guest starring on “30 Rock” (2009, 2010, 2012) and “Unbreakable Kimmy Schmidt” (2015). This year he has two more chances to be recognized for comedic performances.

He returned to “Kimmy Schmidt” as diabolical doomsday cult leader Richard Wayne Gary Wayne in the interactive film “Unbreakable Kimmy Schmidt: Kimmy vs. the Reverend.” It’s a final reckoning between Kimmy (Ellie Kemper) and her former kidnapper as she tries to solve one last mystery connected to her captor. Hamm is up for Best Movie/Limited Supporting Actor, which is a crowded field in which he’s vying against multiple men from “Hollywood” and “Watchmen” for a nomination, not to mention his own co-star Tituss Burgess.

His better chance may be Best Comedy Guest Actor for playing a version of himself on “Curb Your Enthusiasm.” In his episode, “Elizabeth, Margaret and Larry,” he prepares for a movie role playing a character inspired by Larry (Larry David), so he shadows Larry and takes on his characteristics. As of this writing Hamm is among the top six likely nominees according to the combined predictions of our users. And one of our Top 24 Users, who got the highest scores predicting last year’s nominations, thinks he’ll win.

But Hamm could run into the same problem he had on “Mad Men”: “Curb Your Enthusiasm” has never won an acting Emmy in any of its nine previous seasons. Though it would be a delicious irony if Hamm won for playing a variation of Larry before Larry David does. If so, that might be fodder for “Curb” season 11.