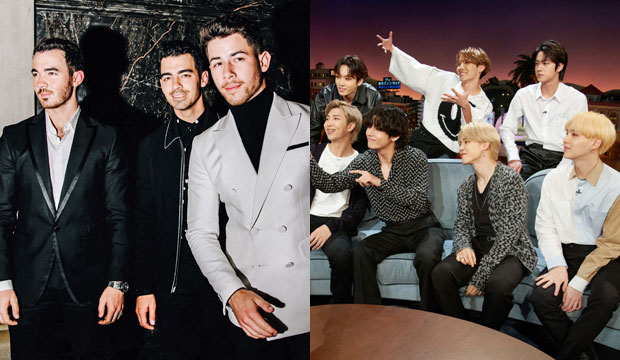 Are the Jonas Brothers more popular than BTS? The Billboard Music Awards may answer that question on October 14. These awards are decided not by fans or industry members judging the quality of music. Rather, winners are chosen based on the same commercial criteria that determine the weekly Billboard charts: record sales, online streams, touring performance, radio airplay and social engagement. So which fan-favorite will come out on top in the race for Top Duo or Group by those metrics.

It’s important to remember that these awards were delayed, so they’re judging the eligibility period from March 2019 to March 2020. That means it only includes a few weeks of release for BTS’s album “Map of the Soul: 7,” which dropped in February. And it doesn’t include their chart-topping English-language single “Dynamite,” which came out in August.

It may be telling that the Jonas Brothers are the only duo or group also nominated for Top Artist, so perhaps it’s a slam dunk for them to win this category. This eligibility period started the week after their comeback single “Sucker” became their first number-one hit on the Billboard Hot 100, and it includes their chart-topping album “Happiness Begins.”

As of this writing the Jonas Brothers get leading odds of 82/25 with support from 14 of the Top 24 Users who got the highest scores predicting last year’s BBMAs. But BTS are very close behind with 37/10 odds with eight of our Top 24 betting on them to win. It appears to be a two-way race; the rest of the nominees trail with 9/2 odds — Panic! At the Disco, Maroon 5 and Dan and Shay.

Do you agree that it’s down to the Jonas Brothers and BTS?