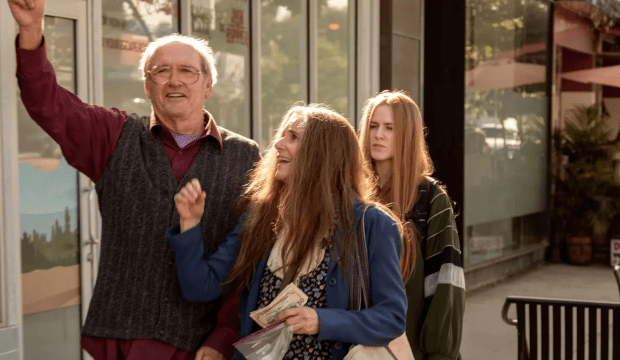 Miranda July‘s latest film “Kajillionaire” is in theaters now and numerous critics are hailing it as the director’s best work to date. The comedy-drama stars Evan Rachel Wood as a young woman who swindles her way through life alongside her scheming parents, played by Academy Award nominees Richard Jenkins and Debra Winger. One day, they bring in a stranger (Gina Rodriguez), after which things become more complicated. This Focus Features title is available in select theaters on Sept. 25 and will come to VOD on Oct. 16.

“Kajillionaire” currently sits at a positive 79 on Metacritic, besting July’s previous two films, “Me and You and Everyone We Know” (2005) and “The Future” (2011). An impressive 28 of 29 reviews are positive with just one mixed and zero negative. The film is at a very fresh 90% on Rotten Tomatoes, with the critical consensus stating: “Whether you see ‘Kajillionaire’ as refreshingly unique or simply bizarre will depend on your cinematic adventurousness — and fans of writer-director Miranda July wouldn’t have it any other way.”

Numerous critics highlight how the film balances its quirky comedic styling with emotional resonance. Reviewers rave about the film’s “cerebral and irreverent” touch, with July and the cast able to “find humanity lurking within their quirky oddballs.” Even those who weren’t as taken with July’s “more abstract” approach point out the “flashes of brilliance” throughout. Some particularly like the “divine” chemistry between Wood and Rodriguez while Jenkins and Winger “make the most of their small monsters.”

It is possible that like with July’s previous films, “Kajillionaire” could be too outré for the academy’s taste, but with the number of “best film yet” mentions, one could imagine it showing up in year-end lists and at the Independent Spirit Awards, where the director has been recognized before. Check out some key “Kajillionaire” reviews below.

Eric Kohn (Indiewire): “July’s style is at once cerebral and irreverent, but ‘Kajillionaire’ doesn’t always find the most satisfying way to juggle those dueling tones. However, its spell lingers as July’s biggest concepts take root, and the movie turns from tragic to hopeful at an unlikely moment in tune with the artist’s previous works.”

Tomris Laffly (RogerEbert.com): “The chemistry between Wood’s deep-voiced, reluctant outcast and Rodriguez’s scrappy, vivacious go-getter is so divine that their joint passage is what ultimately sells and counts in ‘Kajillionaire’ … Often hilarious and gradually heartbreaking.”

Leah Greenblatt (Entertainment Weekly): “Jenkins and a nearly unrecognizable Winger make the most of their small monsters, peeling back layers of callousness and calculation to hint at the messier motivations underneath.”

Chris Evangelista (Slashfilm): “July – and her performers – find humanity lurking within their quirky oddballs. There’s also plenty of humor to be had, mostly from Wood’s deadpan delivery.”

Jordan Raup (The Film Stage): “More abstract than her previous films–and therefore, I imagine, off-putting to many–the steady, surreal, and sweet flashes of brilliance in this one-of-a-kind story are enough to sustain interest during some of the more tedious passages.”

Bilge Ebiri (Vulture): “July takes these weird, desperate characters and gives their lives a couple of cosmic twists that serve both to clarify her vision and to expand it. This might be her best film yet.”