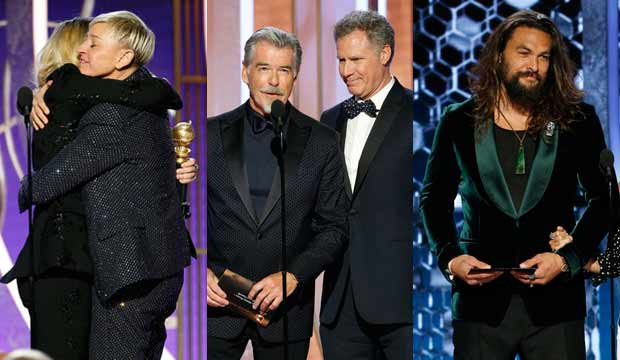 “1917,” “Once Upon a Time in Hollywood,” “Succession” and “Fleabag” were the talk of the Golden Globes in terms of the winners (see the full list here), but what about all the moments in-between? Scroll down for our poll results at the bottom of this post to find out what stood out the most to our readers.

Globes watchers couldn’t agree on their favorite moment, which is probably a good sign for any awards telecast. After all, you don’t want there to be just one good moment during the three-hour show, do you? But a leading 28% voted for Kate McKinnon presenting the Carol Burnett Award to Ellen DeGeneres for her achievements on TV. McKinnon not only impersonates DeGeneres on “Saturday Night Live,” she’s also an openly gay comedian with career opportunities that DeGeneres helped make possible when she famously came out of the closet in the 1990s.

McKinnon joked about lifting weights in her mother’s basement and wondering if she was gay, so maybe that’s how she muscled past Jason Momoa‘s, well, muscles. 22% of respondents said it made their night when he appeared with his jacket off — and his sleeves off — in the crowd. The erstwhile “Aquaman” basically photobombed a thirst trap into the Globes telecast.

Another 17% of our readers were won over by Charlize Theron, who presented the Cecil B. DeMille Award to Tom Hanks and nearly fainted when he complimented her acting during his speech. After that there was a smattering of support for other highlights of the night: 6% loved it when Will Ferrell sniffed his co-presenter Pierce Brosnan, 5% appreciated “Jojo Rabbit” star Roman Griffin Davis‘s irrepressible enthusiasm, and 5% loved Tiffany Haddish‘s irrepressible enthusiasm when she presented Best TV Movie/Limited Series to “Chernobyl.”

Check out our complete poll results below, and if you disagree with the results you can keep voting in that poll right here. 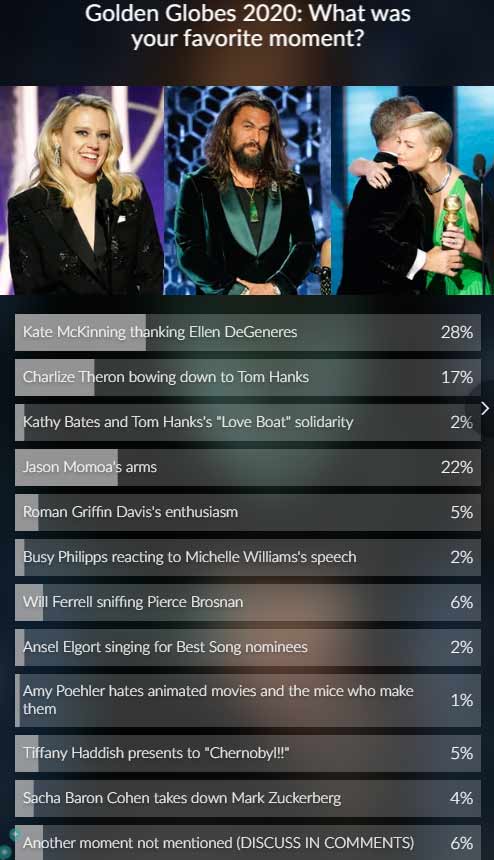