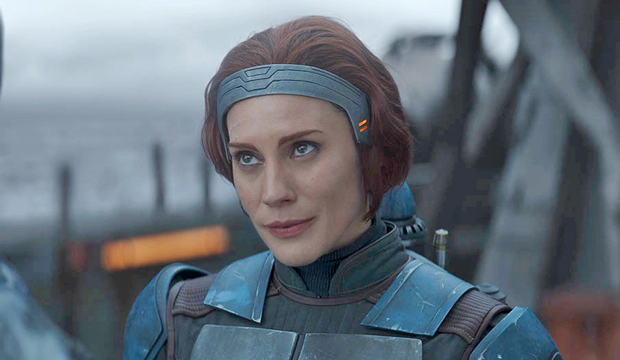 “The Mandalorian” pulled off a surprise Drama Guest Actor nomination for Giancarlo Esposito at this year’s Emmys. Thanks to the live action introduction of fan favorite character Bo-Katan Kryze, Katee Sackhoff could follow in Esposito’s footsteps and make up for years of criminal Emmy snubs.

Sackhoff gained first gain notoriety by playing Kara “Starbuck” Thrace on “Battlestar Galactica,” a reimagining of the classic 80s space tale for a more modern audience. The series was hailed by critics, won a Peabody Award, and was named one of the 100 Best TV shows of all time by Time Magazine. But that success never translated with Emmy voters.

“Galactica” did score 19 Emmy nominations over its four season run, but only competed above the line three times: twice for directing and once for writing. None of its cast, which also included Oscar nominees Edward James Olmos and Mary McDonnell, were ever nominated for an acting Emmy. Sackhoff actually won a Saturn Award for TV Supporting Actress in 2006, her second of four total bids with that awards body. But the actress has yet to find her way to the Emmys.

Continuing to bulk up her sci-fi street cred, Sackhoff voiced the Manadlore warrior Bo-Katan in the animated series “Star Wars: The Clone Wars” and “Star Wars: Rebels.” When the Disney Plus series “The Mandalorian” decided to include the character in its ever expanding lore, Sackhoff was given the chance to bring Bo-Katan to life in live action form.

SEE Thanks to ‘The Mandalorian’ Emmy win, composer Ludwig Goransson only needs a Tony to complete EGOT

She made her debut in the hit series in the recent Season 2 episode titled Chapter 11: The Heiress. Given the history of the character, Bo-Katan’s live action debut is arguably the most celebrated reveal of the series since Baby Yoda first popped his head out of that cradle in Season 1. Sackhoff was predictably badass in Chapter 11, taking out legions of stormtroopers with her jetpack, blade, and blaster. But her performance is notable for challenging Din Djarin’s (Pedro Pascal) perception of his own culture. It’s Bo-Katan who reveals that Djarin was raised by an extremist fringe group and that there’s more than one “way” to be a Mandalorian. The steely demeanor and presence Sackhoff displays in these scenes confirms a maturity in her skills as an actress. It provides a nice contrast to the wild child Kara Thrace that the performer became famous for playing.

Disney keeps details on their hottest series close to the chest, so there is no telling how many total episodes Sackhoff’s Bo-Katan will appear in this season. Considering each episode in Season 2 has thus far taken viewers to a new planet with new side characters, it is likely that Sackhoff won;t be in more than half of the episodes, making her eligible for the Emmys’ Drama Guest Actress category. Since voters had no qualms citing Esposito in Guest Actor for his villainous Moff Gideon, Sackhoff could finally secure the Emmy recognition that eluded her Starbuck for years.