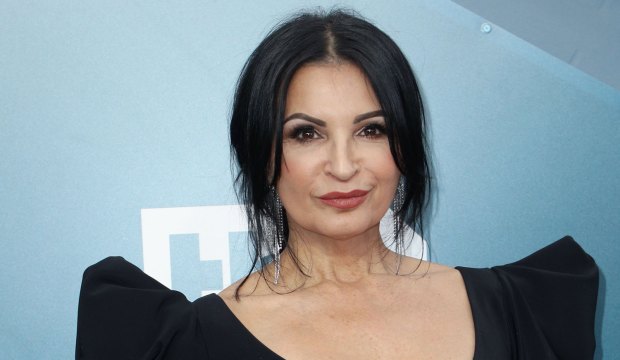 Kathrine Narducci is married to the mob. Joe Pesci‘s wife in “The Irishman,” John Ventimiglia‘s missus on “The Sopranos,” plus “Jersey Boys,” “A Bronx Tale,” the ‘hit’ list goes on and on. Soon she’ll be Al Capone‘s sister in the upcoming “Capone” starring Tom Hardy. GD recently caught up with her from a safe social distance. She was in a new Brooklyn apartment painting. Not the walls. Canvases.

GD: How long have you been painting?

KN: “I started when I was 25. When I get obsessive I just start painting. Now more than ever expressing yourself is important. Everything is all bottled up. Can’t go out. Right now it’s like my canvases are my friends. Where I get things out without words.”

GD: Is the work angrier these days?

KN: (Laughs) “Well I just started this thing, it just came to me. I was on a plane ride, my last trip to the Academy Awards. And I got stuck in a very bumpy flight. I said to the stewardess, ‘Why is it so dark in the middle of the day?’ And she said, ‘Because we’re flying right through the eye of the storm.’ And I said, ‘What?’ She goes, ‘We can’t go around it because it’s windy. We have to go through it. So it’s gonna be really, really bumpy. But in about 20 minutes we will come out and it’s going to be clear.’ And I was so scared — oh my God, paralyzed. I remember I kept looking obsessively and thinking I just want to see a ray of sun, and I can see I won’t die. That’d be good. All of a sudden I look out and I start to see rays of sun come through the black clouds, and I said, ‘Wow, I just went through the eye of the storm.’ You always hear that expression, but I physically went through it and we came out okay, and it was sunny and it was beautiful and it was clear. Right now I feel like that’s the world we are in. And I just started painting these wild canvases of these storms with the eye in it and expressing myself that way. I feel exactly like I did on that plane. Like I feel afraid, unsure, I feel the same exact way I felt on that plane. It’s what was inside of me. I wasn’t thinking ‘this will be cool, and they will like this or they will like that,’ I was just going through a very raw, organic process. I’m compelled to go to the canvas. It’s therapy. My art room is like visiting my therapist.”

GD: Are you with family?

KN: “I live alone. I’m high anxiety. I’m scared. You go to bed unsure, you don’t go to bed the same way you did before all this. I just bought a place in the Bronx. It’s been a lifesaver. The Bronx is the new Brooklyn. I was born and raised in Manhattan on the same block as [famous mob restaurant] Rao’s.”

GD: So speaking of anxiety, Tom Hardy always seems to play very driven gangsters. What was your relationship like on the set?

KN: “I play his sister. Tom Hardy is intense on screen. I thought he was going to be completely Method the whole time but the minute the camera stops he’s laughing and joking. We were deep in Louisiana in the bayou for six weeks and we all became family. We were in these little inns.”

GD: Since you’ve played so many mobbed up molls, do the real ones come up and say, “Hey, youse is gettin’ it wrong?”

KN: (Laughs) “Mob guys come up to me. A lot of them flirt. I either remind them of their wife, their girlfriend or their mother. I am in a lot of mob stuff, but who I am is so not that. And now? We’re supposed to do a second season of ‘Godfather of Harlem’ with Forrest Whitaker for Epix. Maybe now that will be a Zoom.” (Laughs)

GD: I know you have a small role in the new Hugh Jackman/Alison Janney HBO film “Bad Education.” And you try to kiss him?

KN: “That was so exciting for me because who doesn’t love Hugh Jackman? Extremely down to earth and kind. He gave everyone on the crew lottery tickets. It’s just something he does, I guess. He lives in New York and loves New York. But he’s one of those actors who is not aware of how big a star he is. Humble — that’s how Marty [Scorsese] and Bob [De Niro] are. I think the bigger you are the less you have to prove, you know?”

GD: So I won’t give away why, but there’s no kiss. And what about the lotto tickets?

KN: (Laughs) “I wanted to get at least one smack on the lips with that guy, but it wasn’t to be. And I didn’t win the lottery, so I struck out twice.”