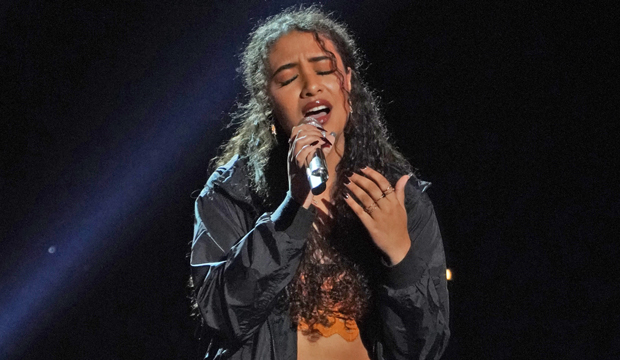 “The show’s over.” That’s what “American Idol” judge Katy Perry had to say about Kimmy Gabriela following her Hollywood Week performance of A Great Big World‘s “Say Something.” Kimmy, a 17-year-old student from Florida, originally auditioned with OneRepublic‘s “Let’s Hurt Tonight” where the judges told her she was worthy of the Top 10. That made Kimmy extremely “nervous” heading into Hollywood Week, she revealed to mentor Bobby Bones.

“I’m a little bit afraid that they’re not gonna like me as much this time,” Kimmy told the camera before her big moment on stage. “They said I was Top 10 material, which I still can’t wrap my head around.” She later revealed that succeeding on the show would be “everything [she] ever dreamed of.”

The talented teen was happy to have her father by her side during Hollywood Week, saying she “could not do this without him.” As it turns out, her dad won a similar competition program in Puerto Rico when he was around Kimmy’s age. “Ever since then he was touring and living the life of his passion. I listen to his stories and I just want to follow in his footsteps,” she explained.

When Kimmy stepped out on stage in front of Katy, Luke Bryan and Lionel Richie, they all clearly remembered her from her viral performance. “Oh God, she’s gonna kill,” Katy noted. She was right. Kimmy gave one of the best Hollywood Week performances in recent memory, making her an early front-runner to join the “American Idol” winners list alongside such big names as Kelly Clarkson and Carrie Underwood. “I think she’s lying about her age,” Katy later chuckled.

In his “American Idol” live blog, our recapper Denton Davidson had this to say about the performance: “Next up is Kimmy Gabriela who had one of the best auditions this season and she’s continuing the hot streak with her performance of ‘Say Something.’ Following Kimmy’s performance Katy walked away saying, ‘The show’s over.” After the judges compare notes they’ve decided Margie, Nick and Kimmy will all move to the next round!”