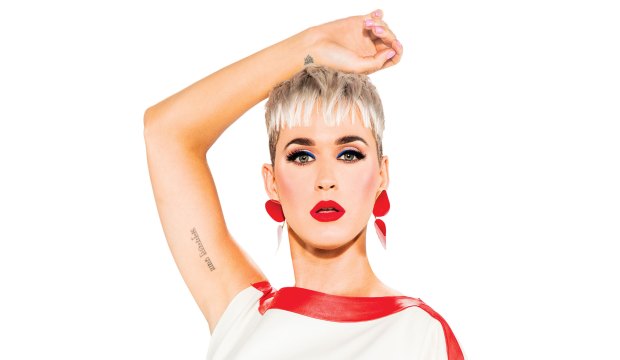 Katy Perry‘s new album “Smile” dropped on August 28, 2020, three years after her last release, “Witness,” underperformed commercially. So will this be the record that puts her back on top? Critics have already started to weigh in. Scroll down to see some of the reviews.

As of this writing the album has a MetaCritic score of 59 based on seven reviews thus far: one mostly positive and the rest somewhat mixed, but none outright negative. Perry has never really been a critics’ darling, though. The critical average of her five albums as Katy Perry (after one self-titled Christian rock album as Katy Hudson) is 54. Her 2010 album “Teenage Dream” scored 52, and that didn’t stop it from going eight-times platinum, producing a record-tying five number-one singles, and earning a Grammy nomination for Album of the Year.

Most of the reviews consider “Smile” to be a relatively solid album, though it doesn’t explore much new territory. It’s Perry “playing to her strengths,” “content to stay in her lane” and providing a “general feeling of uplift.” Though that means it also feels “too familiar,” “by-the-numbers” with “basic, repetitive hooks” and missing some of her “mischievous layers of glitter and innuendo.”

The story of “Smile” might be told commercially, though its singles haven’t replicated the success of her earlier hits that would top the charts as a matter of course. The 2019 standalone single “Never Really Over,” which is featured this album, peaked at number-15 on the Billboard Hot 100, and its official lead single “Daisies” peaked at number-40 earlier this year.

But judging from her upbeat odes and empowerment anthems, she’s still committed to trying to bring her fans good vibes. Check out some of the reviews for the album below, and join the discussion on this and more here with your fellow music fans.

Leah Greenblatt (Entertainment Weekly): “If that cheerleader-with-a-cherry-on-top affect has given free rein to haters, it’s also suited her; an artist knowingly playing to her strengths … She’s always held fast to her own goofball MO: a blithe, candy-colored conduit for the shifting whims of ace songwriting teams and Swedish studio wizards … But even at its sweetest, ‘Smile’ still feels like the too-familiar work of a star committed to remaining pleasantly, fundamentally unchanged.”

Alexa Camp (Slant): “This self-reflection, however, is too often accompanied by by-the-numbers pop that puts the more adventurous, if uneven, ‘Witness’ in stark relief … Tracks like ‘Teary Eyes’ and ‘Champagne Problems’ trade in the kind of basic, repetitive hooks that have lamentably become de rigueur in mainstream pop … Rather than build on any of the sounds she experimented with in the past, Perry seems content to stay in her lane.”

Helen Brown (The Independent): “As a fan of Perry the human being – admiring her sane survival of both her oppressive religious upbringing and her marriage to Russell Brand, who dumped her by text – I find myself delighted that she is making such a safe recovery … But as a fan of Perry the pop star – a Disney princess with a wicked tongue in her cheek – I miss the mischievous layers of glitter and innuendo she once daubed over her cartoon imagery.”

Lindsay Zoladz (New York Times): “‘Smile’ doesn’t have much of an agenda beyond a general feeling of uplift, and it has a lightness that makes it a better and more nimble record than its predecessor. All I’m asking of a Katy Perry song is for it to make me feel marginally happier than I did three and a half minutes prior. There are a handful of songs on ‘Smile’ that do the trick.”