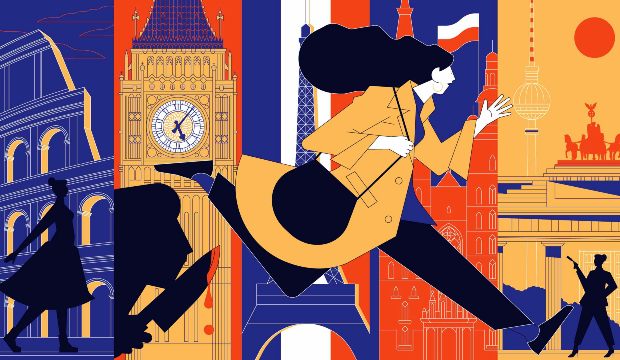 “Killing Eve” has launched a tie-in website to comfort quarantined fans as the third season finishes its run and the wait for the fourth season begins. A culture portal called Travel Vilain — French for “naughty” and an ode to Villanelle — encourages users to #StaySafeStayCurious by traveling virtually to key locations from the show. London, Moscow, Paris and Rome are available at launch, with Amsterdam and Barcelona to be added later. The page for each destination includes clips from the show in that city, as well as tourism insights through a partnership by “Killing Eve” network BBC America with online travel publication Culture Trip. Blog items about the characters played by core cast members Sandra Oh, Jodie Comer, Fiona Shaw and Kim Bodnia feature rundowns about how various cities resonate for these characters, complemented by episodic stills and original illustrations (see above). Interviews, quizzes and other “Killing Eve” content also feature on Culture Trip.

The late May launch of Travel Vilain puts “Killing Eve” in contention for a new Emmy. The interactive branch of the TV academy revamped its categories for 2020, so “Killing Eve” stands to be an inaugural nominee for Best Interactive Extension, which roughly replaces the Best Scripted Interactive Creative Achievement award that “Black Mirror: Bandersnatch” won last year over “Game of Thrones” and “The Good Place,” although “Bandersnatch” would instead qualify for Best Interactive Derivative Program if it had contended this year. Such structural changes are commonplace for the academy, which has no regard for consistency across years and also always strives to be ahead of the curve. For example, although Netflix did not break through with a Best Drama Series nomination for “House of Cards” until 2013, such digital releases had been Emmy-eligible since a 2008 amendment.

SEEour ranking of Villanelle’s most gruesome and messed-up kills.

“Band of Brothers” was the first recipient of a juried award for interactivity in 2002; the Emmys continued to forego nominations through 2008, when a “Lost” tie-in was announced as having been shortlisted, but not technically nominated (and it was not awarded). 2009 transitioned to a more traditional nominating process, with “Lost” trouncing online extensions by “The Office” and “30 Rock” that were also nominated officially in a new fiction category. The 2009 award is credited in the history books though to “The Dharma Initiative,” a fictional organization within the show.

SEEour spotlight on Jodie Comer’s chances of an Emmy repeat.

“Killing Eve” stands to bag AMC Networks, the parent company of BBC America, its first interactive win after three nominations for AMC’s “The Walking Dead” franchise. What do you think will happen? Make your Emmy predictions so that Hollywood insiders can see how their shows and performers are faring in our odds. You can keep changing your predictions as often as you like until the nominations announcement on July 28. And join in the fun debate over the 72nd Primetime Emmy Awards taking place right now with Hollywood insiders in our television forums.