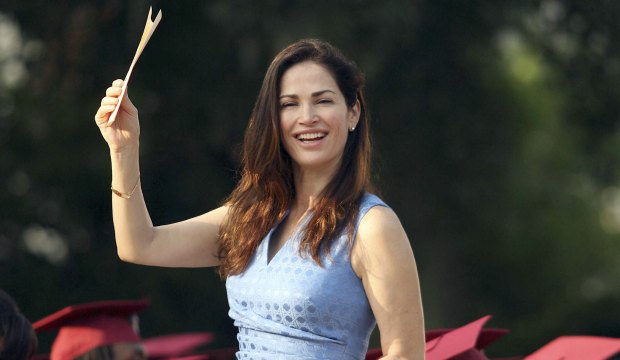 Our sister site Deadline exclusively reported that Kim Delaney will be joining the cast of “General Hospital.” Though the actress is best known for her role as Detective Diane Russell on “NYPD Blue,” this will actually be a homecoming of sorts. She has never starred on “GH” before, but she actually launched her career on an ABC soap.

Delaney played Jenny Gardner on “All My Children” from 1981 to 1984, earning a Daytime Emmy nomination for Best Supporting Actress in 1983. The daughter of Opal Cortlandt and Ray Gardner, Jenny was the sister of Tad Martin (Michael E. Knight), who continued with the show for decades after she was killed by a jet ski that had been rigged to explode — who can’t relate?

In the 1990s she joined the cast of “NYPD Blue,” becoming a series regular in season three. She earned three consecutive Emmy nominations for Best Drama Supporting Actress (1997-1999), winning on the first of those noms. She stayed with the show full-time until season eight. Since then she has continued to work regularly on TV including roles in “Philly,” “CSI: Miami” and “Army Wives.”

SEEAlison Sweeney returns to ‘Days of Our Lives,’ so fans will get some relief from the 2020 cast exodus

No word yet on who Delaney will be playing, but perhaps she’ll cross paths with her former on-screen brother since her “AMC” co-star Knight joined the cast in 2019 in a recurring role as attorney Martin Gray, earning a Daytime Emmy nom earlier this year for Best Guest Performer.

Delaney’s first episodes are scheduled to air in late September or early October. “GH” has been back in production since late July after the COVID-19 pandemic forced most TV productions across the industry to shut down. It returned with new episodes at the beginning of August, so it’s back to airing weekdays on ABC.