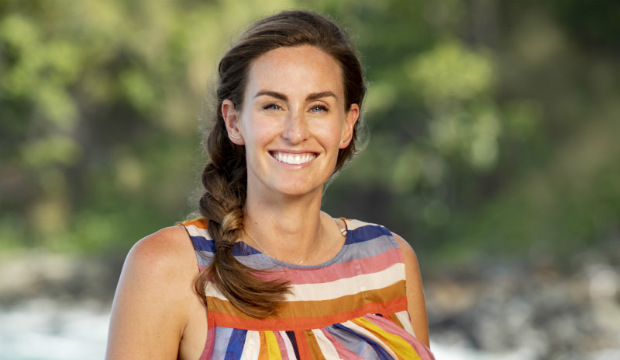 “The feeling of being voted out was weird, but I’m not sorry for trying to gather the troops to take out Tony,” declared Kim Spradlin-Wolfe after her shocking elimination in “Survivor: Winners at War” Episode 12. Kim’s plan was to remove the wildest and most unpredictable player from the game, Tony Vlachos, but he was saved when he won his third immunity necklace in a row. “I think it was the right move and the game’s not over,” she added in her post-show exit interview.

In the immunity challenge Kim was one of the few people who voluntarily quit in order to eat cookies and peanut butter. She now seems to be second-guessing that decision, explaining with a smile, “I won’t step down for peanut butter on the battle back.”

Originally the winner of “Survivor: One World” (Season 24), fans have been clamoring for Kim to return to the island ever since. She managed to play an under-the-radar game this time around, never ruffling any feathers until her elimination episode. However, as Kim noted, the game is not over because she has a chance of returning later in the Edge of Extinction return challenge.

Kim was voted out of the Koru tribe by a 5-3 vote over Jeremy Collins. Kim, Denise Stapley and Michele Fitzgerald voted for Jeremy after their Tony plan fell through the cracks, though Michele’s vote was just for show as she had given her buddy Jeremy her 50-50 coin as a way to protect him. He smartly chose not to use it at tribal council. On her way out the door Kim bequeathed her three fire tokens to Sarah Lacina, Denise and Michele.

When Kim arrived at the Edge of Extinction, Wendell Holland joked he wanted to “smell her breath” to see if it smelled like peanut butter. Zing! Only seven castaways remain in the running to win the $2 million prize: Jeremy, Michele, Denise, Tony, Sarah, Ben Driebergen and Nick Wilson.