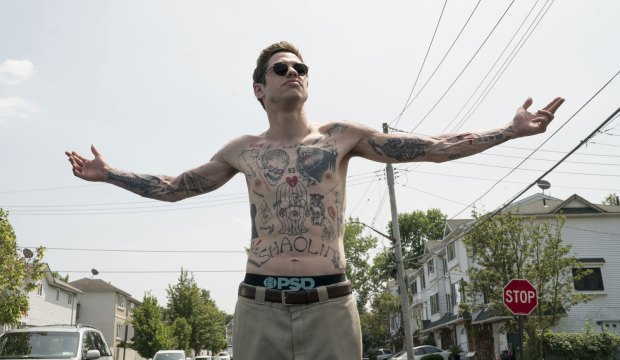 “The King of Staten Island” premiered on June 12 on video-on-demand (instead of in theaters due to the continued pandemic). The comedy is directed by Judd Apatow and stars “Saturday Night Live” cast member Pete Davidson, who also co-wrote the film inspired by his own life and the death of his father, a New York City firefighter who was a victim of the 9/11 terrorist attacks. So what do critics think of that blend of pathos and humor?

As of this writing the film has a MetaCritic score of 68 based on 43 reviews so far: 29 positive and 14 somewhat mixed, but none outright negative. On Rotten Tomatoes, the film is currently rated 70% fresh based on 150 reviews; since RT only classifies reviews as positive or negative, that means 105 critics generally like the film while 45 dislike it to varying degrees. The RT critics’ consensus summarizes the reviews by saying, “‘The King of Staten Island’s’ uncertain tone and indulgent length blunt this coming-of-age dramedy’s ability to find itself, but Pete Davidson’s soulful performance holds it together.”

Reviewers are saying that Davidson “proves his capabilities as a leading man” in “another ‘loosely-based on’ comedy that [Apatow] could be proud of.” It’s “heartfelt” and “insightful” and “resonates with those realities” of loss. But indeed, the 136-minute film has been criticized for “incurable ramble” and “odd tonal shifts.” “The scenes don’t unfold or reveal … They just pile up.”

So according to journalists, the film is appealing, if rough around the edges, but Apatow has had success marrying his filmmaking to the personality of a writer-star, as in the AFI Award-winning “The 40-Year-Old Virgin” (2005) with Steve Carell and the Golden Globe-nominated “Trainwreck” (2015) with Amy Schumer. So could “King” be a similar breakout moment for Davidson? Check out some of the reviews below, and join the discussion on this and more here with your fellow movie fans.

Karen Han (Polygon): “Director Judd Apatow banks on that appeal in his new VOD movie ‘The King of Staten Island,’ which stars Davidson (who also co-wrote the script with Apatow and Dave Sirus) as a loosely fictionalized version of himself, and proves his capabilities as a leading man … There isn’t a weak performance in the bunch, and Davidson’s apparent willingness to put his flaws and vulnerabilities on screen keeps ‘The King of Staten Island’ afloat.”

Alan Ng (Film Threat): “Judd Apatow strikes gold again … maybe not gold, but another ‘loosely-based on …’ comedy that he could be proud of. Like ‘Trainwreck’ with Amy Schumer, Apatow mines a heartfelt and comedically tragic film loosely based on the life of ‘SNL’s’ Pete Davidson in ‘The King of Staten Island’ … Probably, one of the most effective forms of therapy, Davidson teams with Apatow, to tell a fictional yet insightful depiction of his life.”

Leah Greenblatt (Entertainment Weekly): “The script, which Davidson co-wrote, is rooted in his own childhood loss; his father, too, was a fireman, killed on 9/11. In its best moments the movie resonates with those realities, though it also comes packaged, like so many Apatow films, in a kind of incurable ramble — some two-plus hours dotted with pleasingly random cameos (Pamela Adlon, Steve Buscemi) and odd tonal shifts.”

Wesley Morris (New York Times): “‘The King of Staten Island’ is one of those 10-block-radius life slices whose smallness and intimacy ought to be a virtue. But the movie seems afraid of itself … Here, the line between depth and bloat never comes close to fine. Apatow has left everything in. The scenes don’t unfold or reveal personalities. They just pile up; they’re long bits — parties and hangouts and meals. A violent robbery comes out of nowhere and leads to even less.”