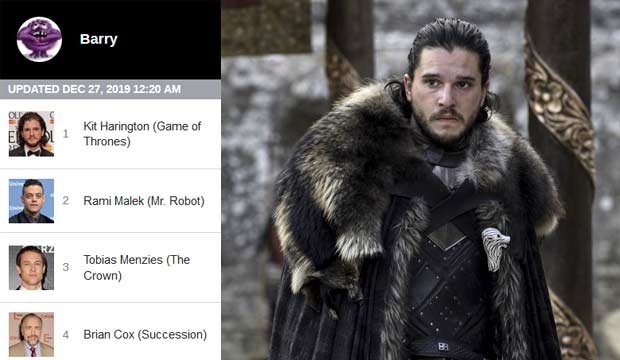 “Game of Thrones” ended its eight-season run on HBO with another 12 Emmys this past fall, including a record-tying fourth victory for Best Drama Series. But the Golden Globes have never been that into the show. However, despite that bias, Kit Harington made the cut for Best TV Drama Actor for the first time. Can he win? One of our Top 24 Users thinks so.

Our Top 24 got the highest scores predicting last year’s Globe winners for TV, which gives their forecasts more weight in this year’s race. Given the show’s shortfall over the years — it has never won Best Drama Series and only took home a single acting award for Peter Dinklage in 2012 — it makes sense that Harington is an underdog according to the combined predictions of all our users, but top user Barry thinks he’ll actually pull it off.

“Thrones” may not have been the Hollywood Foreign Press Association’s cup of tea, but it was still one of the most successful TV shows of all time both in terms of its awards success and its fandom. Harington gives them one last chance to avoid missing the boat on one of the 21st century’s most celebrated shows. It would also give them a chance to plant their flag on Harington, who has never won an Emmy, Globe, SAG Award or Critics’ Choice Award for his role as the heroic Jon Snow. Voters may be tempted to be the first to put him on their stage, accepting his first trophy at a major televised event.

This wouldn’t be the first time an actor won for his farewell season. Bryan Cranston did that in 2014 even though “Breaking Bad,” like “Game of Thrones,” had never been a hit with the HFPA before that. Jon Hamm also took home a farewell Globe for “Mad Men” in 2016, and just like Harington he was the only nominee for his show that year. So don’t count Harington out. He may have been exiled from Westeros, but there’s at least one throne he can still claim.