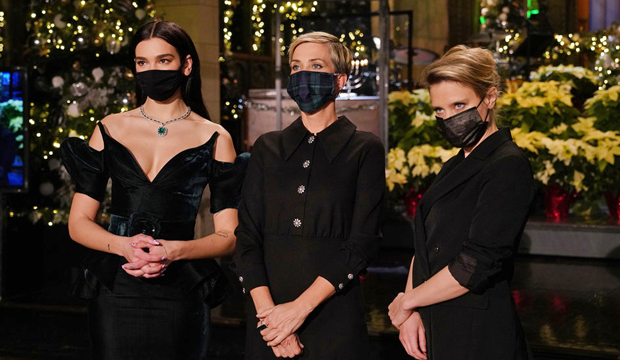 Kristen Wiig returned to her old stomping grounds at “Saturday Night Live” this week. Hosting for the fourth time since leaving the show in 2012, Wiig is currently promoting her new film “Wonder Woman 1984,” set to debut on Christmas Day. For her opening monologue, the actress performed a unique rendition of “My Favorite Things” from “The Sound of Music,” though not with the lyrics you remember.

Some of Wiig’s favorite things, per her song, included: “long beards on babies and mittens with wings.” She continued: “Hawk and Shalhoub are my two favorite Tonys, going to court dressed like Lord of the Rings.” Before she could continue onward, her old pal Maya Rudolph joined to correct her and tell her Wiig’s lyrics “didn’t make any sense.” Rudolph then launched into her own verse of “My Favorite Things,” singing of “Pop Rocks on hot dogs and mustard on lady,” and musical improv of Mr. Wayne Brady.”

To escalate things further, Kate McKinnon joined the pair onstage to clarify that those were not in fact the lyrics. While McKinnon (accurately) sang of “cream-colored ponies and crisp apple strudels, doorbells and sleigh bells and schnitzel with noodles,” Rudolph and Wiig were offended, with the former even questioning whether McKinnon’s lyrics were racist. They told McKinnon that the spirit of the song was making up your own lyrics and the trio finished out the song.

While Wiig has had a flourishing career in film and television outside of Studio 8H, she has returned to the NBC sketch series frequently over the years. She has collected two Emmy nominations for her first two hosting jobs in 2013 and 2016; her third hosting appearance came earlier this year in the Season 45 finale, which took place virtually rather than in studio.