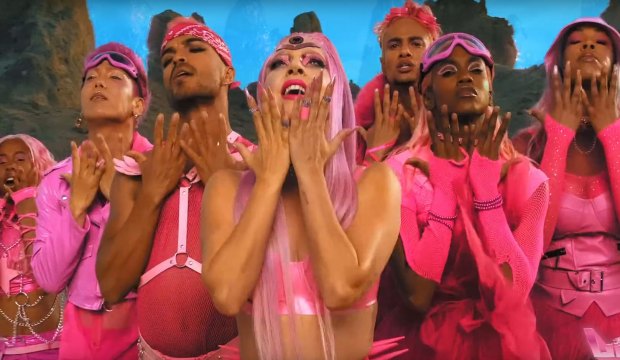 Lady Gaga‘s “Chromatica” was originally scheduled for release on April 10, but she pushed it back due to the coronavirus pandemic, which had just exploded across the globe. But fans didn’t have to wait too long: she just dropped it on Friday, May 29, and listeners have already been giving their hot takes. Scroll down to see some of their commentary. Let us know what you think by joining their discussion here or responding below in the comments.

Gaga hasn’t been gone for long. It has been less than two years since she released the soundtrack for “A Star is Born” with its Oscar-winning, chart-topping duet “Shallow” with Bradley Cooper. But it has been a while since she released a non-soundtrack studio album on her own. Her last was “Joanne” in 2016, which was more of a stripped-down pop record. This is her first full-blown dance pop album since “Artpop” back in 2013.

“Chromatica” was preceded by its lead single “Stupid Love,” which was released on February 28 and debuted at number-five on the Billboard Hot 100 singles chart, becoming her 12th top-five hit. Then on May 22, just a week before the release of the entire album, she dropped a followup single, “Rain on Me” featuring Ariana Grande. And the day before the album’s release she delivered fans another collaboration, “Sour Candy” with K-pop group Blackpink.

But now you can listen to all 16 tracks from the album. Have you heard it yet? If so, how many times? See what some of our forum posters have already had to say about it below, and make or update your Grammy predictions if you think it’ll be a winner, a nominee, or snubbed entirely.

SEELady Gaga’s ‘Stupid Love’: Is it stupid, or do you love it? [POLL]

Reformed Thot: “This will do. I liked it more than I expected. Gaga has replaced aggressive, dark, thrashing dance-pop with something more light and bob-your-head-y. Nothing here makes me feel as ethereal or perverse as her best songs. But it’s a solid dance-pop album.”

JennyLewisFan: “Now I get the dance talk everyone’s talking about. This is the first time in a while that I’m listening to something that blurs the line between the two. But the production isn’t the star of the album (even though it’s decent enough), it’s her vocals, and the dance category is very production focused, so my vote for Chromatica would be in pop.”

JustGuy89: “I enjoyed Chromatica more than I thought I would. I’ll have to give it a few more listens in order to form a better opinion. I thought the use of intros and interludes was a smart idea, they work so well with a dance record like this. Alice was a standout instantly, I think it might be my favorite.”

Mr Brightside: “No song reaches as high as some of her earlier highs, but the overall album is a well produced cohesive body of work. The lyrics are wacky but they’ve always been that way. That transition between the instrumental and “911” is genius. I’d give it 8/10.”