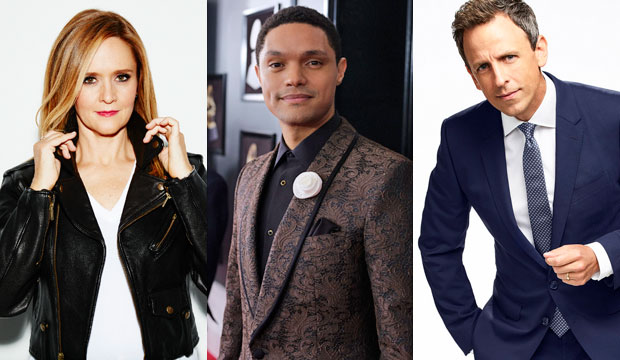 “Full Frontal with Samantha Bee” is returning March 25 with new shows under the unusual quarantine conditions we find ourselves in amid the coronavirus pandemic. And it’s not alone. Other late night stars are keeping the home fires burning — often literally from home — to keep fans sane and entertained in this unprecedented time.

Samantha Bee, with the help of her husband and fellow executive producer Jason Jones, will be out in the woods and a safe six feet away from each other to shoot the new shows. Bee said in a statement, “Doctors, nurses, and grocery store clerks are fighting on the front lines, and the least the rest of us can do is stay home. Even if that means my husband just became both my cameraman and makeup artist.”

Bee isn’t alone in going on with the show despite social distancing restrictions. “The Daily Show with Trevor Noah” is bringing its recent YouTube episodes to its usual Comedy Central time slot: “The Daily Social Distancing Show” will be hosted by Trevor Noah from his home with the help of writers working from their own homes.

“Late Night with Seth Meyers” will shoot at-home versions of its popular “Closer Look” segment tackling the day’s current events, to be aired on his show’s YouTube channel. Jimmy Fallon has also been using the “Tonight Show” YouTube channel to do at-home editions with guests who have included Lin-Manuel Miranda, Jennifer Garner and J Balvin. Stephen Colbert turned “The Late Show” into “The Light Show” from a safe distance. And Jimmy Kimmel is doing quarantine “minilogues.”

Are you comforted by late night comedians continuing to bring the laughs?