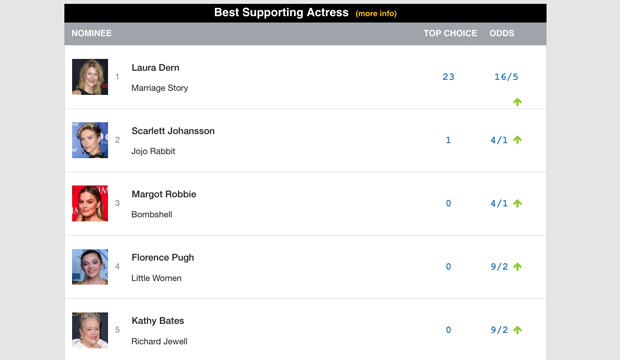 Our Top 24 Users who had the best scores predicting last year’s Oscar winners are virtually in agreement on this year’s four acting races. All 24 say Joaquin Phoenix (“Joker”) will win Best Actor, Renee Zellweger (“Joker”) will claim Best Actress and Brad Pitt (“Once Upon a Time in Hollywood”) will take Best Supporting Actor. However, one lone user by the name of Vincenzo Colantonio dares to go against his 23 fellow predictors by saying the winner of Best Supporting Actress will be Scarlett Johansson (“Jojo Rabbit”) and not Laura Dern (“Marriage Story”).

For the most part Colantonio is sticking with the overall odds in the other Academy Awards categories. He picks “1917” for Best Picture and Best Director (Sam Mendes), “Once Upon a Time in Hollywood” for Best Original Screenplay, “Toy Story 4” for Best Animated Feature, “American Factory” for Best Documentary Feature and “Parasite” for Best International Film.

However, he defies the odds for Best Adapted Screenplay, choosing “Jojo Rabbit” instead of front-runner “Little Women.” Could Colantonio be onto something in predicting “Jojo Rabbit” will upset on Oscar night by winning adapted screenplay and supporting actress? After all, the film is a Best Picture nominee with six nominations — that’s one more than last year’s overall winner “Green Book.”

Do YOU have what it takes to compete against Gold Derby’s best Users? By making your Oscar predictions you are also competing against our Experts from major media outlets, our website staff Editors, and your fellow readers and friends. Get started right now!