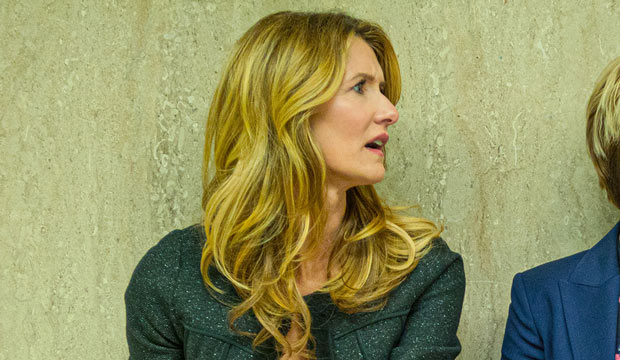 And the Oscar goes to … Laura Dern! You can already hear those words, right? It’s not just me? According to the Golden Globes, Critics’ Choice and SAG Awards, Dern is the Best Supporting Actress of the year for her role as divorce attorney Nora Fanshaw in Netflix’s “Marriage Story.” She’s also the odds-on favorite to win at the upcoming BAFTA Awards. Usually when someone takes home all four of these televised precursors, they have the Oscar in the bag — just ask recent category winners like Allison Janney for “I, Tonya” (2017) and Viola Davis for “Fences” (2016). Below, see four reasons why I predict Dern will follow this same awards trajectory.

1. She was everywhere in 2019.
Sure, Dern may officially be nominated for Noah Baumbach‘s “Marriage Story,” but don’t think for one second Oscars voters weren’t also giving her credit for her buzzed-about roles in “Little Women” and “Big Little Lies” when marking their ballots. Dern is having the kind of year most actors only dream of, and that’s really saying something as Hollywood is notoriously cruel to actresses over 50 years old. At Sunday’s SAG Awards Dern is nominated individually for “Marriage Story” and as part of the “BLL” ensemble, proving her dominance across both film and television.

2. Netflix won’t go home empty-handed.
The streaming service dominated Oscar nominations morning with a leading 24 bids, up from 15 last year. However, Gold Derby’s odds currently have Netflix winning only one above-the-line race (Dern for Best Supporting Actress) and one below-the-line category (“American Factory” for Best Documentary Feature). If Dern doesn’t prevail, that means Netflix could be completely shut-out in the main categories. Sorry, that’s just not gonna happen. Netflix has a powerful campaign team that’s taken awards season by storm, so they’ll be guns-a-blazing to make sure they walk away with as many Oscars as possible, beginning with easy gets like Dern.

3. That monologue.
If you’ve seen “Marriage Story,” you know what I’m referring to. There’s a monologue toward the end of the movie (watch below) in which Dern’s divorce attorney speechifies about the double standard of mothers vs. fathers in the workplace. “As a woman, as an actor, to read this one particular monologue that Noah wrote for my character was like Christmas morning,” Dern has said about the now-viral scene. It’s the kind of moment that makes Oscars voters really sit up and pay attention because, hey, maybe a few of them actually wish it was them that got to deliver that speech.

4. She’s on the board of governors.
Specifically, she’s currently serving on the actors branch along with Whoopi Goldberg and Alfred Molina. Academy members won’t pass up this opportunity to reward one of their own, particularly someone as well-liked as Dern who’s a child of the industry. The last time Dern was up for an Oscar was “Wild” (2014), which she lost to Patricia Arquette (“Boyhood”), who had steamrolled the supporting category all season long. Before that, Dern was nominated as a lead actress in “Rambling Rose” (1991), losing to Jodie Foster (“The Silence of the Lambs”).