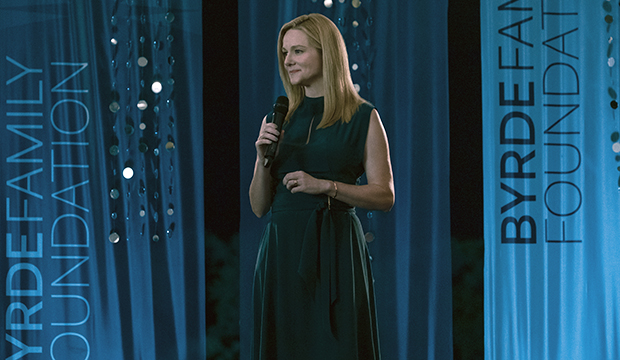 Since Jennifer Aniston (“The Morning Show”) won’t be back to defend her drama actress crown at the Screen Actors Guild Awards due to COVID-19 delaying production on her show’s second season, the path is all clear for someone else to snatch the statuette. According to our SAG TV odds, most likely to do so is “Ozark’s” Laura Linney, who could avenge her crushing Emmy loss for her show’s third season.

The actress has a total of seven SAG Award nominations, including two individual ones for “Ozark’s” first two installments. A victory for its third season would be the second one in Linney’s career, having triumphed once before for her turn in the HBO miniseries “John Adams” in 2009. The good news for her is that “Euphoria’s” Zendaya, who beat her at the Emmys, is competing in a different category at the SAG Awards, limited series/TV movie actress, as she’s only eligible for the “Euphoria” special that aired on HBO on Dec. 6 (she was snubbed by SAG for the first season). Plus, Linney’s support for “Ozark” has been much more consistent at the SAG Awards than at the Emmys, where she was left out for the show’s debut installment.

Expected to rival her for the throne are three Netflix companions from “The Crown,” Olivia Colman, Gillian Anderson and Helena Bonham Carter, who sit in second, third and fifth places, respectively. While Claire Foy, who played Queen Elizabeth II in the show’s first two seasons, managed to win this category back to back in 2017 and ’18, she faced no internal competition in both years. The last person to overcome two co-stars was Edie Falco for “The Sopranos” way back in 2000 (when, ironically, Anderson was nominated for “The X-Files”). And usually, when this happens, there’s a clear standout among the co-stars, which arguably isn’t the case with the women of “The Crown” — especially since the fourth season introduced Anderson’s transformation into “Iron Lady” Margaret Thatcher and a scene-stealing Emma Corrin (who’s in sixth place) as Princess Diana.

A potential vote-split could catapult Linney to the top of the category, but she might also have to watch out for her “Ozark” co-star Julia Garner, who rounds out the top five in our odds in fourth place. Not only did Garner surprise with her inaugural nom alongside Linney in 2019, as the only supporting player in the lineup, but she then went on to win back-to-back supporting actress Emmys. In order for Linney to beat Garner, she would have to break an 18-year curse of no one being able to triumph in the company of one co-star, with Falco, again, being the last one to pull it off for “The Sopranos” in 2003. That said, the SAG Awards typically favors vets over younger rising stars, as well as lead over supporting turns — “Downton Abbey’s” Maggie Smith was the last supporting player to take home the drama actress prize in 2014 — which would give Linney the edge.

A lot of the adulation for the show’s third season — which earned series-best reviews and its highest Emmy nominations total (18) to date — could, in fact, be chalked up to Linney’s character Wendy Byrde’s enlarged role and the actress’ all-around commanding performance. While it’s hard to argue that the four-time Emmy winner and three-time Academy Award nominee is overdue for recognition, the fact that she hasn’t racked up any hardware for this role could give her a narrative on which to ride. And if she had an advantage anywhere, it’s at the SAG Awards, which have been here for “Ozark” from the get-go. SAG recognized leading man Jason Bateman with a nomination in 2018 and victory in ’19, and shortlisted the ensemble for the first time in ’19. As of this writing, Bateman is the odds-on favorite to take home the drama actor statuette once more, while the show trails reigning champ “The Crown” in second place for drama ensemble.