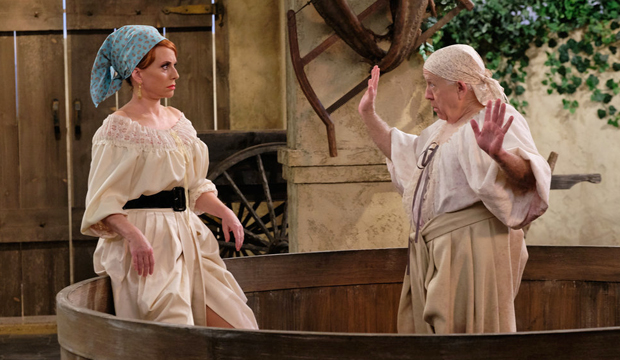 If only one good thing came from being quarantined for months, it’s Leslie Jordan. This Tennessee native spent much of his time at home entertaining the masses with his hilarious and always-viral Instagram account, which is nearing a gobsmacking five million followers. Jordan’s newfound popularity could end up having another unintended consequence as well … at the 2020 Emmys. He already has one Emmy Award on his mantel as Best Comedy Guest Actor for “Will & Grace” in 2006, but he could now win a bookend trophy for returning to play Beverley Leslie one last time in the final season.

Jordan popped up in April’s “We Love Lucy” episode that paid tribute to the iconic sitcom “I Love Lucy.” In his single scene, Jordan played opposite Megan Mullally‘s Karen, Beverley’s longtime rival, as they recreated the classic grape-stomping scene together (watch below). Before long, the stomping turned to wrestling as Karen and Beverley threw down in the wine vat and covered each other in squishy grape juice.

The “Will and Grace” episode was a fun fantasy in which Karen, Grace (Debra Messing) and Jack (Sean Hayes) each portrayed Lucy, Ethel and Fred at various times; Will (Eric McCormack) stuck to playing Ricky. In the other black-and-white sequences, Grace’s Lucy got drunk while doing a commercial for Vitameatavegamin and Jack’s Lucy got stuffed when he shoved chocolate into his face.

Sure, Jordan’s role may be short, but we’ve seen blink-and-you-miss-it performances prevail in these guest categories before. Margo Martindale won for sipping coffee in “The Americans” in 2015, and then again for sitting on a park bench in 2016. And just last year, Cherry Jones claimed victory for a single flashback scene in “The Handmaid’s Tale.” In each of these cases, of course, Emmy voters weren’t judging the performance in the specific episode, but instead were considering the entire arc for the character. That could help Jordan since he was such an integral part of “Will & Grace,” making 17 guest appearances since 2001.

SEESean Hayes (‘Will and Grace’): Saying goodbye to Jack McFarland was ‘a little deeper this time’ [EXCLUSIVE VIDEO INTERVIEW]

Gold Derby’s predictions center is now open for the four guest star categories, so jump in there right now and make your picks. You can change them at any time until the Emmy nominations are announced July 28.