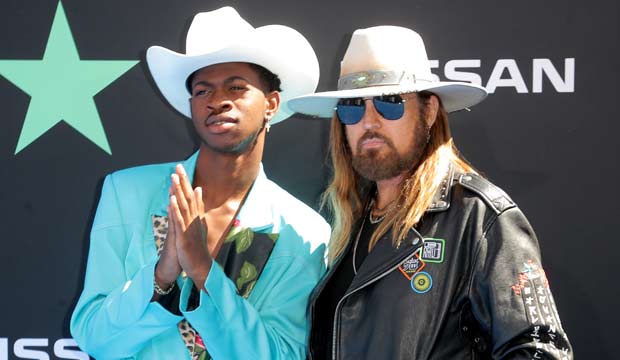 Lil Nas X and Billy Ray Cyrus broke records with “Old Town Road,” and now they might ride to the Grammys. They’re the front-runners to win Record of the Year when the academy announces their winners on Sunday night, January 26.

“Old Town Road” gets leading odds of 9/2 as of this writing. Those odds are calculated by combining the predictions of more than 1,800 Gold Derby users who have given us their forecasts here in our predictions center. The song, which spent a record-breaking 19 weeks on top of the Billboard Hot 100 singles chart, is backed by most of the Editors who cover awards year-round for Gold Derby and 16 of the Top 24 Users who got the highest scores predicting last year’s Grammy winners.

But Nas and Cyrus will have to overcome a couple of biases to prevail. For starters, inescapable songs of summer are often nominated for Record of the Year, but they don’t usually win. In recent years, “Blurred Lines” by Robin Thicke, T.I. and Pharrell Williams; “Fancy” by Iggy Azalea and Charli XCX; and “Despacito” by Luis Fonsi, Daddy Yankee and Justin Bieber all topped the Billboard Song of Summer chart and were nominated for Record of the Year, but they feel short of the prize.

Grammy voters have also been skittish about hip-hop music in the general-field categories, though that might be changing. Last year Childish Gambino‘s “This is America” broke rap’s glass ceiling by winning Record and Song of the Year. So the recording academy might finally be catching on to that decades-old music genre.

And Lil Nas X got more support from the recording academy overall than we expected. His bids for Record of the Year and Best New Artist were no surprise, but he ended up with six noms total, including Album of the Year for “7,” which is especially impressive given that it’s an EP and not a full-length album. It’s less than 20 minutes long.

That could be a crucial vote of confidence in the 20-year-old newcomer, which combined with the song’s unprecedented success could make this only the second hip-hop winner in Record of the Year history.