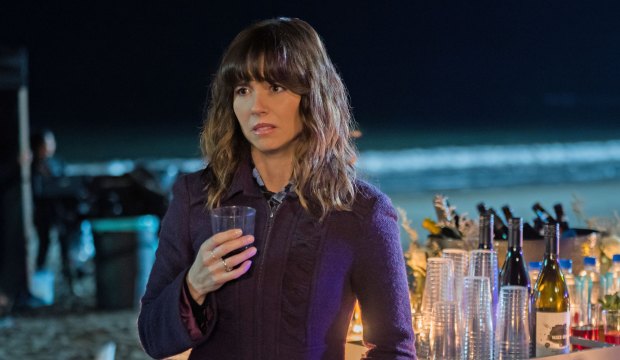 After missing out on a Best Comedy Actress nomination for “Dead to Me’s” debut season last year, Linda Cardellini’s Emmy hopes were revived as she made the cut for the Netflix series’s sophomore outing this time around. A previous Best Drama Guest Actress nominee for “Mad Men” in 2013, she is now on her third career nom (she is also currently nominated for Best Comedy Series for executive producing “Dead to Me”) and hopes to finally collect her inaugural acting victory with the help of her episode submission, “If Only You Knew,” the seventh installment of season two.

Cardellini plays Judy Hale, a kind woman who in season one accidentally killed Jen Harding’s (Christina Applegate) husband in a hit-and-run and then befriended Jen under false pretenses. Season one ended with Jen killing Judy’s ex-fiance Steve (James Marsden), and in “If Only You Knew,” the two women help Steve’s semi-identical twin brother Ben (also Marsden) organize a vigil, in part because Jen feels guilty, but also to keep suspicion off of them.

Judy dreads having to face her ex-fiancé’s family and friends, especially his mother (played by Frances Conroy), but an unexpected encounter with his four-months pregnant fiancée is what ultimately leaves her an emotional mess. Finally, she clashes with Detective Perez (Diana-Maria Riva), who has been investigating the hit-and-run and warns Judy that she’s keeping a close eye on her, to which Judy gut-wrenchingly responds, “All you’re gonna see is a good f*cking person trying to do the right f*cking thing all the time!”

So how alive are Cardellini’s chances of winning her first Emmy? Let’s consider the pros and cons.

SEEEmmy episode analysis: Christina Applegate (‘Dead to Me’) confronts new fears and old foes in ‘It’s Not You, It’s Me’

Even though Cardellini has been on television for 24 years, also turning in acclaimed work on “Freaks and Geeks” and “ER,” she’s never won a major peer group award. Goodwill for her collective contributions to the small screen could finally tip her over the edge this year.

She is also helped by the fact that, after Applegate was its lone representative at last year’s awards, “Dead to Me” shot up to four nominations including casting and series for its second season. That indicates  greater support for the show overall, and perhaps for Cardellini specifically.

The actress radiates positivity and charisma, turning her deeply flawed character into one with whom viewers sympathize. The episode displays her full emotional range as Judy goes from gleeful to crestfallen, angry and broken, with the actress’s strong comedic timing shining through, like when she follows her outpouring of emotions to Perez with a hilarious non-sequitur: “I have to go pick up the paper bags because I don’t want a seal to choke.” Concurrently, Cardellini wears the grief of five miscarriages and losing a loved one, as well as the guilt of taking someone’s life, on her face at all times.

If voters watch all six nominees’ submissions, they will also see Cardellini pack a punch in Applegate’s entry, “It’s Not You, It’s Me,” where Judy visits her mother (Katey Sagal) in prison and we learn that she had to take care of herself during her childhood whenever her drug-addled mother was unable to. Then Jen not only tells Judy the truth about how Steve died, but also accuses Judy of loving anyone who gives her attention. In an ensuing scream that Judy lets out in her car, Cardellini unloads all the pain her character has internalized up to that point. So she has two equally strong submissions for the price of one.

“Desperate Housewives” star Felicity Huffman is the last winner in this category (2005) who won against a co-star (she faced two, Marcia Cross and Teri Hatcher). But that was under the old system, when small judging panels evaluated episode submissions and ranked the nominees in order of preference. With voters now checking off just one name, it’s possible that the two “Dead to Me” actresses will cancel each other out. And if they don’t, it’s possible that Applegate is the one who will prevail since she was also nominated last year when no one else from the show made the cut.

While “Dead to Me” impressively built on its season one nominations total, Cardellini faces two performers from shows with nominations in the double digits – Rachel Brosnahan for “The Marvelous Mrs. Maisel” (20) and Catherine O’Hara for “Schitt’s Creek” (15) – plus another whose show has twice as many noms as “Dead to Me,” Issa Rae for “Insecure” (eight). So those contenders may have more overall support from voters.

Save for Applegate and 2018’s Best Comedy Actress champ Brosnahan, none of the other nominees in this category have a single acting win in their careers (though O’Hara won in 1982 for co-writing “SCTV”), so Cardellini isn’t the only one in this race who could be considered due.