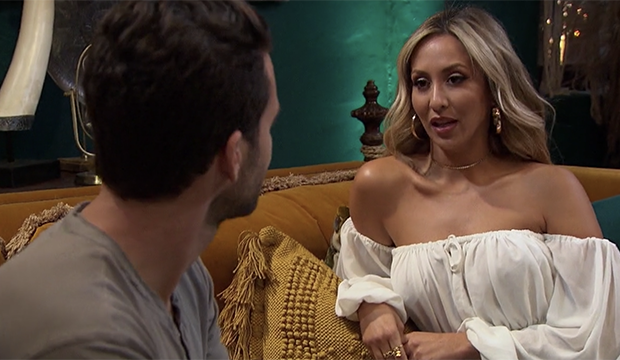 Monday’s episode of “The Bachelor Presents: Listen to Your Heart” dropped a bombshell (literally and figuratively) as 33-year-old pop singer Natascha of Los Angeles threatened to shake up the budding romance between Jamie and Trevor, who are quickly becoming the season’s unofficial star couple.

The first date card of the night went to Jamie, who whisked Trevor away to Venice Beach, Calif., joining forces to sing Little Big Town‘s “Girl Crush” which drew a few curious bystanders. During their date, Natascha introduced herself at the mansion, bringing a heavy dose of intimidation with her (“I’m not a diva,” she said. “But I’m a diva”). Having been told “Trevor from ‘American Idol’” was part of the group, she proceeded to spill the tea that she is a friend of Trevor’s ex Sierra, who broke up with him a year and a half ago due to his alleged indiscretions.

When Jamie and Trevor returned to the mansion, it was time for the truth. Trevor told Natascha that he never physically cheated on Sierra, but admitted that he emotionally cheated. During their conversation, Jamie was consoled by some of the ladies who brought her up to speed about Natascha. When Jamie and Trevor were alone again, he shared his perspective, admitting he emotionally cheated and had texts to prove it. Jamie said cheating is usually a dealbreaker for her, but she still wanted to see how things would work out between them, choosing to “trust the Trevor of today than the Trevor of two years ago.”

The second date card was given to Bri, who chose to fuel her romance with Chris. While alone at Guitar Center, the duo, who genuinely seem to have the strongest connection, found themselves organically communicating through song, ultimately leading to Chris serenading her on piano with Elvis Presley‘s “Can’t Help Falling in Love.”

Sheridan received the third date card, taking his crush Julia to iHeartMedia. While on air, Julia awkwardly admitted she had kissed someone other than him. Even so, he took the news in stride since he has been all in for her from the beginning. Their date culminated with a performance of Maren Morris‘ “The Bones,” ending in a kiss. While Sheridan and Julia were away, Rudi patched things up with Matt, apologizing for her fiery confrontation last week.

There’s never a dull moment in the world of “The Bachelor,” so it wasn’t surprising when two new contestants arrived: 23-year-old R&B/pop singer Mariana of Dallas and 25-year-old indie pop singer Ruby of Austin, Texas. Both instantly put Savannah, Rudi and Mel on alert. All three were worried the newcomers were targeting handsome Brandon, who had become, in Mel’s words, a hot commodity.

The final date card went to Savannah, who took Brandon to the intimate Dresden Restaurant, where legendary jazz duo Marty and Elayne have performed for nearly 38 years. When Savannah and Brandon took to the stage to perform Peggy Lee‘s “Fever,” sparks definitely arose that were not there before.

As the rose ceremony approached, Julia told Sheridan she still felt something for Brandon, leaving him blindsided in a moment strikingly overlapped with Ruby and Rudi’s impromptu duet of Amy Winehouse‘s “Love Is a Losing Game.” Right before the ceremony, desperation was in the air. With the men in charge of the roses, it was imperative for the women not to waste time. Mel went all in for Brandon. Natascha became smitten with Ryan, who proved he must be one hell of a kisser. And Rudi made sure to double-check her status with Matt. In the end, Chris chose Bri, Trevor chose Jamie, Matt chose Rudi, Ryan chose Natascha, Danny chose Bekah, Brandon chose Savannah, Gabe chose Ruby, and Sheridan chose Julia. Mel, Cheyenne and Mariana were sent home.

Next week, the first performances of the season take the spotlight judged on artistic and romantic compatibility. Let the competition begin!