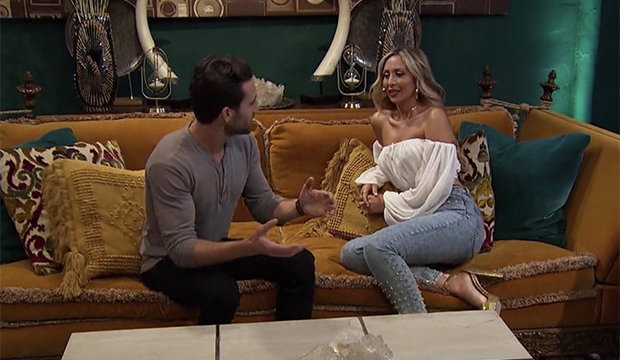 Natascha Bessez was one of three new women to join “The Bachelor Presents: Listen to Your Heart” in the second week, and she by far made the biggest impression. After inquiring if the Trevor of the house was “Trevor from ‘American Idol'” on Monday’s episode, she took matters into her own hands, confronting him about allegedly cheating on her friend, Sierra Nielsen, who was his girlfriend when he was on “Idol.” Trevor denied physically cheating and insisted there was only “emotional cheating,” as he was texting another woman. Natascha asked him to come clean to his crush Jamie, who decided to give Trevor another shot.

It seemed like the drama was over after that, in the episode at least, but Natascha still claims that Trevor physically cheated on her friend because that was what Sierra had told her. (In an Instagram post in September 2018, Sierra wrote about healing from someone’s “betrayals,” and that “infidelity & deceit come with a lot of pain & heartache.”)

“First of all, [emotional cheating is] just as bad in my book. ‘Oh, I’ve been talking to women behind my girlfriend’s back.’ That’s just as bad as physically cheating!” Natascha told “Entertainment Tonight.” “He was trying to dodge a bullet there, and I could see right through it. I’ve been told it was definitely not just emotional cheating. And you can Google it now. There are tons of girls coming out saying the same thing.”

For what it’s worth, in February, after the “Listen to Your Heart” cast was announced, Reality Steve shared that he had received numerous messages from women stating “what a dog” Trevor is. In that same vein, Natascha says that since the show has wrapped, she’s “learning new things every single day” about the country-pop singer and has “gotten so many messages from women saying, ‘Thank you.'”

“This is not just my girlfriend. There are so many other women he has done this to. He is a master manipulator, and it’s shocking to me how many women have been caught up in his web,” she said. “It’s really upsetting and it’s disappointing to see. It’s sad to see these messages from women.”

The former Miss New York Teen, who has competed on “Pussycat Dolls Present: The Search for the Next Doll” and “The Voice of Holland,” said she did not know Trevor would also be on the show when she joined. Once she confirmed his identity, she wanted Jamie, who at 21 is 12 years Natascha’s junior, to know the truth to make an informed decision.

SEE ‘Listen to Your Heart’ Episode 2 recap: Before he cheats? Natascha stirs the pot

“Being my age and going through what I’ve gone through in relationships, it’s like, every time you can spot it sooner. You can spot that red flag sooner, and that’s what I did when it came to Jamie. She’s a sweet girl and no one deserves this,” Natascha explained, adding that she doesn’t think Trevor is there to find love. “I’m not here to tell her what to do. I’m just here to help guide her or give her the information that will help her make the best decision for herself. As women, we have to look out for each other.”

Jamie, who had told Trevor on their date that she had been cheated on by every guy she’s gone out with (timing!), was initially upset when Trevor told her about his emotional indiscretions. But while cheating would normally be a dealbreaker for her, she said she would trust the person he is today, not the one he was two years ago.

Last week, Trevor said that he was “blindsided” by Natascha’s accusations, but they weren’t something he could control. He did not directly address the cheating charges, saying, “Looking back, I wasn’t ready for a relationship at the time. I had some personal growing to do and I needed that time to be alone and really do that soul-searching and figure myself out. And I think you have to trust the timing of your life.”