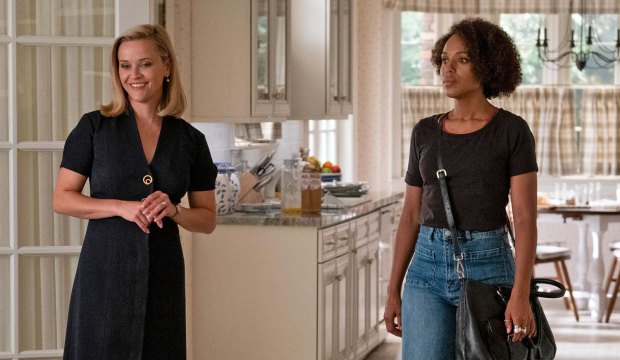 In the first few scenes of Hulu’s “Little Fires Everywhere,” it’s quite clear who story-tellers want us to believe is responsible for burning down the magnificent home of perky matriarch Elena Richardson (Reese Witherspoon). Let’s blame her pouty, rebellious daughter Izzy (Megan Stott), who often seems like she wants to torch the whole world that fails to understand, and douse, her inner rage.

After all, in upcoming flashback scenes, we learn that Izzy has a fondness for flames when she ignites her own hair in the bathroom at home while protesting expectations of how she should look.

But, wait, is Izzy just misunderstood? Are “Little Fires Everywhere” producers misleading viewers in order to create suspense while making us wonder later on if mysterious Mia (Kerry Washington) is really to blame? Or Mia’s seemingly sweet daughter Pearl (Lexi Underwood)? Do you trust her? What about Elena’s brassy kids? Brothers Moody (Gavin Lewis) and Trip (Jordan Elsass) have scores to settle, as you’ll see in future episodes. Their sister Lexie (Jade Pettyjohn) may get straight A’s in school, but she can be a hellcat outside the classroom. Also suspicious is Bebe Chow (Huang Lu), who gets unhinged while seeking the daughter she abandoned as an infant.

Or, heck, did Elena burn down her own home for a provocative reason yet to be revealed? Or do you think Izzy is truly the culprit? Or someone else?

Hulu has only rolled out four of the miniseries’ eight episodes so far. Part five will arrive on Weds., April 1. Where do think the story line is going?

At the upcoming Emmys, “Little Fires Everywhere” competes in the mini/movie categories. It’s currently ranked in fifth place for Best Limited Series and Witherspoon and Washington are competitive in the race for Best Actress. See Gold Derby’s latest Emmy racetrack odds. Share your opinion by making your predictions here.