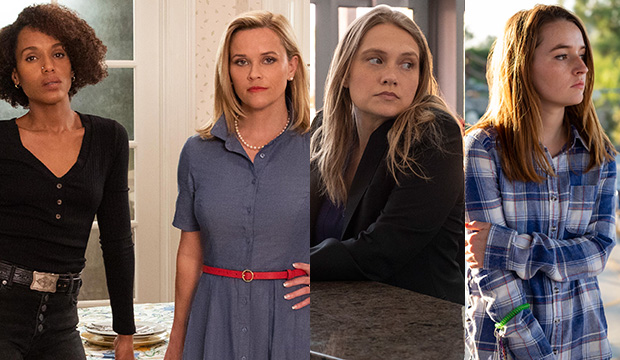 Not everyone comes out a nominee with the new Emmy rules stipulating that the number of nominees be proportional to the number of submissions. The limited lead acting acting categories drew the short end of the stick because both will only have five nominees since neither had at least 81 submissions for six. That is bad news for the actress race, which for a while seemed set with a top six, including two pairs of co-stars.

Assuming the top three are locked and the bottom three are battling for the last two spots, that means one lead acting duo — the “Unbelievable” women or the “Little Fires Everywhere” ladies — would be split. But which one?

SEE Emmy predictions slugfest: Which 5 lead actors and actresses from limited series and movies will make the cut? [WATCH]

The unlimited nominating slots favor both, so this could come down to a few votes. “Little Fires Everywhere” is very much a two-hander with Witherspoon and Washington, while Dever plays the main rape victim around which “Unbelievable” revolves and has her showcase in the first episode. In both cases, it would ostensibly feel weird to vote for one and not the other co-star, especially with no max restriction (“Unbelievable” also fields Toni Collette, who plays Wever’s detective partner, in supporting, where she’s in first place).

There are some other factors at play here. Witherspoon is contending for three shows, but she’s up against herself in Best Drama Actress for the others, “Big Little Lies” and “The Morning Show.” Limited actress has long been thought to be her best path to an acting nomination.

Washington is also competing against herself — in this category. She’s in 12th place for “American Son,” the Netflix film adaptation of the Broadway play she headlined in 2018. It follows an estranged couple trying to piece together their son’s disappearance after a confrontation with police, carrying new relevancy in recent weeks following George Floyd‘s death. (“Little Fires Everywhere,” of course, also tackles race and socioeconomic issues.)

Dever, 23, might be discounted because of her age and being less established than Witherspoon and Washington, but 20-year-old Joey King was nominated last year for “The Act,” and Dever is no newbie, having been on”Justified,” “Last Man Standing” and starred in last year’s “Booksmart.” She’s received Golden Globe and Critics’ Choice nominations for “Unbelievable.” Earlier this month, both she and Wever were nominated in the Television Critics Association Awards’ single gender-neutral drama acting category; Witherspoon and Washington were not.

And obviously, there is the possibility of another contender crashing the party and causing both pairs to be split — or one duo to not get in at all. There are the leads of two raved but smaller series, Shira Haas (“Unorthodox), who is in seventh, and Daisy Edgar-Jones (“Normal People”), who’s in ninth. Oscar winner Octavia Spencer (“Self Made”) sits in eighth, and former nominees Zoe Kazan (“The Plot Against America”) and Aunjanue Ellis (“The Clark Sisters”) are in 10th and 11th, respectively. Ellis, after all, scored a surprising nomination in this category last year after the acting branch went  head over heels for “When They See Us,” making it over predicted nominees Emma Stone (“Maniac”) and Connie Britton (“Dirty John”).

Or this could all be a moot point, and both duos make the cut thanks to a shocking snub or even more shocking, an exact tie.