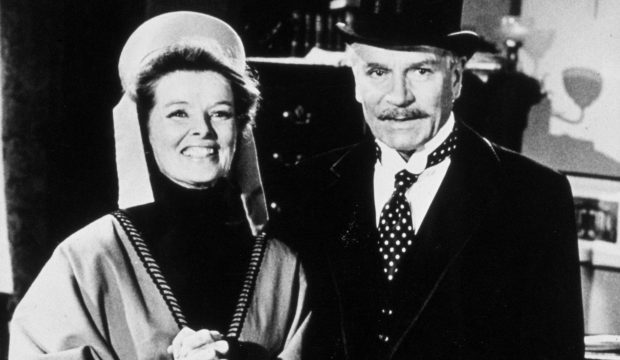 I have especially warm memories of ABC’s “Love Among the Ruins,” which marked the only film pairing of Oscar-winning legends Katharine Hepburn and Laurence Olivier. I was a junior in college when it originally aired and I recall an SRO crowd at the Brooks Hall TV lounge at Allegheny College in Meadville (Sharon Stone’s hometown) PA to watch the exquisite romantic comedy.

Hepburn plays wealthy widow and former actress who, in 1911 London, finds herself slapped with a breach of promise lawsuit by a much younger suitor (Leigh Lawson) accusing her of breaking her promise to marry him.

Enter Oliver as a well-known barrister enlisted to defend her. Olivier had a brief but torrid affair with Hepburn years before when she was an actress. He was so in love with her, he never married. But when he meets her to discuss her case, the feisty, outspoken woman tells him they had never met.

The crowd of young women laughed, cried and were starry-eyed at the end of the film. And  I enjoyed it again when it was repeated in 1976.

“Love Among the Ruins” went on to earn six Emmys that year –best actor and actress, best director for George Cukor, who made his television debut with the film, writer James Costigan, costume design, art direction and set decoration.

It lost the main award, outstanding special program (drama or comedy) to NBC’s crime drama “The Law,” starring a pre- “Taxi” Judd Hirsch. Who out there even remembers “The Law”?

And though they weren’t nominated, John Barry’s score is absolutely enchanting, as is Douglas Slocombe’s (“Raiders of the Lost Ark,” “Julia”) radiant cinematography.

Kino Lorber just released the Blu-ray of the film from a new 2K master. I was excited and nervous when I watched it a few days ago. After all, it had been 44 years since I saw it. Did I just have misty-colored memories of “Love Among the Ruins”? Would I be disappointed? Or would I have the same sentiments watching it as I did as a bright-eyed 20-year-old?

Thankfully, I just adored it. And Hepburn and Olivier were just as magical as I remembered.

“Love Among the Ruins” was a dream come true for Hepburn. When the mighty Kate appeared as a guest on ABC’s “The Dick Cavett Show” in 1973, she talked about not having had the chance to work with Olivier, but was still holding out hope because, “Neither Larry nor I are dead yet.”

Hepburn and Cukor were soon working on pre-production on “Love Among the Ruins,” which marked their ninth collaboration. Cukor had directed Hepburn in her film debut in 1932’s “A Bill of Divorcement” and would make one more movie with her after “Ruins,” the 1979 TV version of Emlyn Williams’ “The Corn in Green.”

When I watched “Love Among the Ruins” this time, I did notice that it unfolds like a three-act play. And for good reason, Costigan, who also won Emmys for “Eleanor and Franklin” and “Little Moon of Alban,” had written the comedy for the famed acting couple Alfred Lunt and Lynn Fontanne. But a production never came to fruition because they had retired in the 1960s.

Olivier initially turned down the role. According to Emmanuel Levy in his 2007 blog on the film, Olivier’s view of “Love Among the Ruins” was the “absolute polarization” of Hepburn and Cukor’s. The two ended up writing a personal letter to Olivier and he finally relented.

Whatever feelings he had about the script; Olivier gives a full-throttle performance as the love-struck barrister. And the final scenes between the two are just spellbinding. Just as I did in 1975, I got misty watching “Love Among the Ruins.” So, make sure you have a box of tissues ready.