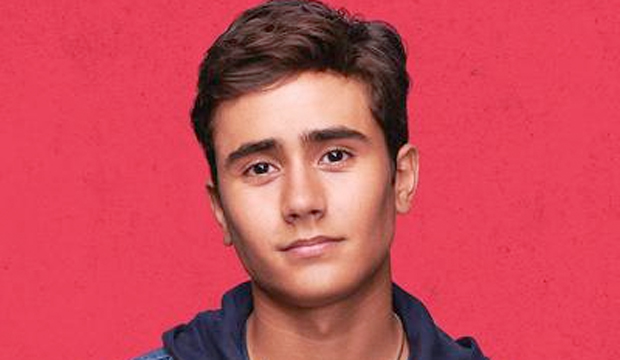 If there’s one thing the Hollywood Foreign Press Association loves to do, it’s to give birth to a star — so could “Love, Victor’s” Michael Cimino be next? The half-hour Hulu series — which is set in the same world as the 2018 coming-of-age dramedy film “Love, Simon” — boasts the 21-year-old actor in his first-ever leading role, for which he could (and should) land a Golden Globe nomination in the Best TV Comedy Actor category.

Cimino plays Victor Salazar, a 16-year-old who embarks on a journey of self-discovery when he and his family move from Texas to Shady Creek, Atlanta. As opposed to “Love, Simon’s” Simon Spier (Nick Robinson), who struggles primarily with coming out, Victor is still trying to navigate and understand his sexual orientation. Cimino sells his character’s inner conflict impeccably, stumbling over his words and his heart patently skipping a beat whenever Victor is opposite his crush, the openly gay Benji (George Sear), but simultaneously finding moments of joy and comfort in his girlfriend Mia’s (Rachel Hilson) presence. While as a viewer you might feel as though you know where Victor’s true desires lie, Cimino makes a conscious effort to accentuate that Mia isn’t just Victor’s safe haven from homosexuality but someone about whom he truly cares — even if, at the end of the day, only platonically.

That’s not to say that the idea of being gay doesn’t send a single shiver down Victor’s spine, because it does, coming from two rather religious parents — whose marriage is, on top of everything else, on the brink of crumbling — and experiencing a moment of fright when Benji pulls away from him after he kisses him. Even though he does so not out of spite but because he has a boyfriend, it activates all the fear and chagrin that’s been lingering in Victor, which Cimino skillfully pours out as Victor runs out and curls into a ball in the motel hallway. Hence, the ostensibly uncomplicated, uncontroversial nature of a relationship with Mia — a girl — yields the type of stability that, at least for the moment, puts Victor at ease.

All roads lead to the eighth episode, “Boy’s Trip,” in which Victor travels to New York to visit Simon, to whom he’d been reaching out via social media for advice. A fish out of water, Victor soaks up the city’s effervescent LGBTQ+ scene and finally comes to terms with his sexual orientation after Simon and his friends show him that, while they are all part of the same community, there are no parameters by which anyone needs to abide to be welcomed into it. It is through that experience that Victor finds the strength to declare his love to Benji and come out to both his best friend Felix (Anthony Turpel) and, in the season’s final seconds, his family. This destination feels so earned because Cimino invites the viewer into Victor’s mindset and guides us through his every emotion, never shying away from channeling those that are a bit more frustrating and/or tedious than one might want them to be.

SEEJack Antonoff (‘Love, Simon’ songwriter) on ‘Alfie’s Song’: ‘There’s an honesty to the film that is rare’ [EXCLUSIVE VIDEO INTERVIEW]

As of this writing, Cimino sits in 12th place in our combined Golden Globe TV odds, which currently forecast a lineup of Eugeny Levy (“Schitt’s Creek”), Ramy Youssef (“Ramy”), Jason Sudeikis (“Ted Lasso”), Ben Platt (“The Politician”) and Don Cheadle (“Black Monday”) in that order. The advantage that Cimino has over the aforementioned men minus Sudeikis is that he’s competing for a first-season show, to which this award has gone seven of the last 10 times, including the most recent two, for Youssef earlier this year and “The Kominsky Method’s” Michael Douglas last year. Ironically, Youssef was Hulu’s first-ever citation in this category, which perfectly paves the way for Cimino to follow in his footsteps — especially since they’ve already rewarded Youssef.

Even though the HFPA omitted Robinson from their Best Comedy Actor lineup at the 2019 awards, it has been quite hospitable toward performers starring in teens-centric projects, on both the film and TV sides, recent nominees including “Booksmart’s” Beanie Feldstein (Best Comedy Actress, 2020), “Eighth Grade’s” Elsie Fisher (Best Comedy Actress, 2019), “13 Reasons Why’s” Katherine Langford (Best TV Drama Actress, 2018) and “The Edge of Seventeen’s” Hailee Steinfeld (Best Comedy Actress, 2017). A nom for Cimino would be a way to both make up for Robinson’s (cruel) overlooking and pen the actor’s breakthrough story — as the HFPA ever so often loves to do for up-and-coming talent.